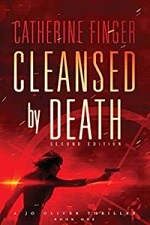 
Haunted by an evil presence she can’t quite grasp, Police Chief Josie Oliver finds herself drawn into the crosshairs of a vicious serial killer. Fighting for her marriage, faith, and fate, Chief Josie is confronted by an Adversary that only God can conquer–if she decides to let Him in.

Finger has a way of making scenes, emotions, reactions, etc., very intense. It is almost too much. Police Chief Jo was a difficult character for me to understand or find engaging. She is a very emotional woman which I found odd for being a police chief. She has not stood up to her abusive husband of four years. And when divorce finally looms, she seems willing to let the jerk take everything, including a house they bought with her inheritance money. She allows a man to live in her basement before the divorce court date. That just did not make sense to me.


Most of the novel is about Police Chief Jo being overwhelmed by emotional issues. There is some suspense at the end but that is all. There is little mystery. There is a serial killer but we, along with law enforcement, know who the fellow is way before the end.

This is a novel for readers who like much personal drama on the part of the heroine and don't mind a plot weak on mystery and suspense. There is a very good salvation message included in the book.

This is the first in a series and you can read my reviews of the other books: Shattered By Death, Anchored By Death, Capsized By Death.

Catherine Finger loves to dream, write, and tell stories. Recently retired from a wonderful career in public education, she celebrates the ability to choose how to spend her time in a new way during the second half of life. So far, she chooses to write books, ride horses, serve others, and generally find her way into and out of trouble both on the road and at home.  She lives in the Midwest with a warm and wonderful combination of family and friends.
Capsized by Death, the fourth novel in her Jo Oliver Thriller series, was released by Elk Lake Publishing in December, 2019. Anchored by Death, the third of her Jo Oliver novels, was a Bronze Medal winner at the 2018 Independent Publisher Book Awards; a 2018 Selah Awards finalist; and a finalist for the National Indie Excellence Awards. Her second Jo Oliver Thriller, Shattered by Death, was a finalist in the International Book Awards and the National Indie Excellence Awards. Catherine and her novels have been featured on radio stations, blogs, and in numerous articles—all posted at www.CatherineFinger.com.
Catherine loves to interact with her readers at www.CatherineFinger.com Follow her on Facebook at Catherine Finger, Author, and on Twitter at CatherineFinger@BeJoOliver.

Cleansed by Death, the first book in the series of four novels, began with an idea to write a book about strong women struggling with life, love, and loss while embedded in traditional male roles. I wanted to show real women dealing with difficult internal and external struggles and create tension for my readers. Playing with the question of whether such challenges make our characters better—or bitter—added depth and twists to my story.
It took a long time to get this story to the point of releasing it into the world. I stopped writing it twice, shelving it for about a year each time. Every summer as I percolated over the story, I read it cover to cover and realized I still loved both the voice and the bones of the story. Adding the faith piece in a way that felt authentic and edgy was the frosting on the cake and it happened as a half vision, half spiritual warfare experience in Jo Oliver’s head and heart. This experience developed her unique brand of conversation with God as she understands Him and added a spiritual dimension to my stories.

My Midwestern roots showed themselves with reckless abandon in this debut—becoming a cornerstone of future installments. As I write this kick-off note to you, I sit in front of my computer facing a wilderness scene that features prominently in this story. Writing in the midst of the corona virus leads me back to some of my favorite places for comfort—the woods and lakes of Wisconsin.

This sounds too intense for me!

Your book sounds like a great read and thank you for sharing it with us.

Sounds like a real page-turner. Looking forward to reading the book.