The Heart of a Hero by Susan May Warren 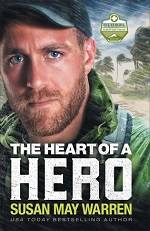 I have mixed feelings about this novel. On the positive side, it has great suspense and good emotional and character revelation and development. I have never been in a hurricane and found Warren's account of one and the aftermath very engaging. Also, there is an excellent gospel message included.

On the negative side is that this book is the second in a series and does not stand well on it's own. Much of the character relationship development in this story is based on experiences from the previous novel which I have not read. That made reading this one not as rewarding as I'd liked. The plot follows three people from sort of first person universal viewpoints. I felt Ham's story was an intrusion into the main story of Aria and Jake. I would rather Warren had followed Ham's life in another novel. There are different locations involved since Ham is in Europe and Aria and Jake are in Florida. I felt the jumps to Ham's story really broke into the flow of Jake's story. And then there were flash backs for the characters. And they were not in chronological order which I found confusing. We read of Ham asking Signe to marry in a flash back well after having read flash backs of experiences later in their lives.

One of my pet peeves is when authors use several points of view, not identifying immediately when such a change occurs in the text. Warren does this, for example at Loc. 3133. The previous section was following Jake's life. The next section starts with a male pronoun but it is not until the third paragraph that we find out the male is now Ham.

I am also opposed to the concept of a cowboy being surrounded with all hope lost and the cavalry miraculously coming over the hill for an amazing rescue. Such a technique provides a less than satisfying end to suspense.

Potential readers need to read the first novel in this series to fully appreciate this one.

Susan May Warren is the USA Today bestselling author of seventy novels with more than one million books sold. Winner of a RITA Award and multiple Christy and Carol Awards, as well as the HOLT Medallion and numerous Readers' Chopice Awards, she lives in Minnesota. You can find out more at www.susanmaywarren.com.

I received a complimentary egalley of this book from the publisher. My comments are an independent and honest review.
(My star ratings: 5-I love it, 4-I like it, 3-It's OK, 2-I don't like it, 1-I hate it.)
Posted by Joan Nienhuis at 11:03 AM