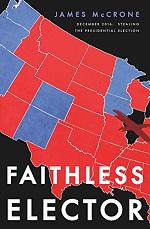 This novel could be today's headlines as we in the U.S. have seen how our presidential elections might be in jeopardy. One of the vulnerable aspects of our elections is the Electoral College. Each state has electors based on the number of representatives the state has. Theoretically the elector is to vote for the candidate who received the majority of votes in the state. Only 32 states have laws requiring such a vote. Rogue electors in other states could vote for a candidate other than the majority vote recipient.

McCrone has crafted a fictional account of one political party going to great lengths to control enough electors to win the presidential election. A University of Washington graduate student studying the electoral system uncovers the problem. But there are compromised people in the high levels of government and the student is killed before he can find a way to make his information available to the right people. And then his academic adviser is attacked.

I like this novel as it really brings to the forefront how an election could be compromised. I like Imogen, an FBI agent and our heroine. I like the sustained action too. I did not like a token sex scene. Though not graphically described, it just seemed so out of place and not following the emphasis of the plot.

Nonetheless, this is a very engaging and informative book for this time in U.S. politics.

James McCrone was raised in the Midwest and the Pacific Northwest. His work, both on and off the page, deals with politics and issues of personal and social responsibility, accountability, and justice. He has worked in community development and affordable housing for more than fifteen years and has been writing for much longer than that. He graduated from the University of Washington with a Master of Fine Arts degree in Creative Writing. He is the former Executive Director of Bloomfield Center Alliance and Main Street Highland Park, both in New Jersey. He is the former Business Manager for the South 9th Street/Italian Market Business Association and now writes full time. He lives in South Philadelphia with his wife and three children.

Posted by Joan Nienhuis at 2:28 PM