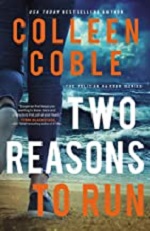 This is the second book in a series. While it reads relatively well on its own, the first in the series should be read first to enjoy the full impact of this one. You can read my review of One Little Lie here.

There is a mystery involved in the plot in the form of an attack on an ocean drilling platform. Jane and Reid, their back story revealed in the first book in the series, work together to find out who wants to damage the deep water facility. Another aspect of the plot is an attempt to harm their son with the goal of getting them to stop their investigation.

Like the first novel in this series, the largest part of the plot deals with the relationship between Jane and Reid. They deal with past issues as romance is rekindled. Also a large part of the novel deals with both Jane and Reid as they continue to try to unravel the truth of their family's involvement in a cult.

There is much suspense in the latter part of the novel. I thought the plot to destroy the drilling platform was a little overkill for what the nefarious person wanted to accomplish. I also thought the continued pursuit of family history in the midst of a potentially devastating event was a little odd. I did appreciate the continued development of Jane's spirituality. We are definitely left hanging with respect to relationships so will be waiting for the next in the series.

Colleen Coble has won or been a finalist in awards from the Best Books of Indiana, the ACFW Carol Award, the RITA, the Holt Medallion, the Daphne du Maurier, National Readers' Choice, and others. She has over four million books in print. She and her husband live in Indiana. You can find out more at http://colleencoble.com.