The End of the Day by Bill Clegg 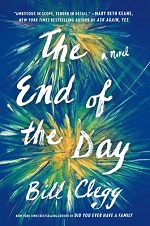 This novel is certainly of a different kind and one not particularly to my liking. It is basically a collection of character vignettes, like character studies an author would create as background for writing a novel containing much information the author would ultimately never include in the actual novel. The vignettes bounce around from current time to years ago to some time in between back to the current time. Sometimes it seemed like there were flashbacks in the midst of flashbacks.

There are a number of new characters introduced by such vignettes. Well into one, I would find out this character has had dealings with someone who is a good friend of a previously introduced character. I painfully exercised patience to see how the lives of all of these people would intersect. I have to admit I found myself skimming over lengthy descriptions of places and events from the past that seemed to have no vital relationship to what was happening in the present.

And I found none of the characters engaging. All of them were deeply flawed and either died during the course of the narratives or were just as dysfunctional at the end of the book as they were at the beginning.

I did not appreciate the writing style. The novel is a prime example of lengthy passages of prose describing what people were doing or saying rather than actually having the people act or speak. There were no dialogue quotation marks, for example, but rather italicized sentences to indicate words spoken. Or were they words thought and not actually spoken? It was hard to tell and too confusing to take the time to figure it out.

And at the end, I found myself saying, so what? Relationship issues were not resolved. Dysfunction and troubled people were still that way. I didn't learn anything interesting about some industry or occupation or geographical location. The prose was not particularly memorable. The novel wasn't terrible but rather just blah. I do not anticipate reading anything else by this author.

Bill Clegg is a literary agent in New York and the author of the bestselling memoirs Portrait of an Addict as a Young Man and Ninety Days. The author of the novels Did You Ever Have a Family and The End of the Day, he has written for the New York Times, Lapham’s Quarterly, New York magazine, The Guardian, and Harper’s Bazaar. Photograph by Van Scott-Clegg

I received a complimentary egally of this book from the publisher. My comments are an independent and honest review.