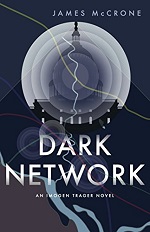 This novel could be out of today's headlines. It is a good political thriller. It is also the sequel to Faithless Elector and to obtain the full enjoyment and understanding of this novel, that one should be read first. You can read my review of Faithless Elector here.

The plot of this novel centers around a conspiracy to cause distrust in the U.S. presidential election and influence the outcome. As in the first in the series, Imogen, an FBI agent and information analyst, tries to uncover who is involved in the election plot. She is helped by other FBI agents and a great computer technician. While many of the operatives in the dark network are arrested, the entire operation has not been shut down, setting the stage for another book in this series. And we are also left with questions about the ultimate goal of nefarious people. Did the FBI foil their plot or play right into their hands.

I like the information McCrone includes about contested presidential elections. He informs about the tie in electoral votes in 1800 and others, such as when the popular vote was won by one candidate and the electoral vote by another. We see in this novel what happens when there is no clear electoral majority.

McCrone has a enjoyable writing style. I found this to be a very engaging novel. The analysis of all the information gathered is amazing. I trust all the technical abilities, like the following of cell phones, are actually real.

James McCrone graduated from the University of Washington with a Master of Fine Arts in Creative Writing. He lives in Philadelphia with his wife and family.

Posted by Joan Nienhuis at 2:53 PM