The Red Ribbon by Pepper Basham 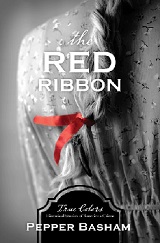 This novel is one in the True Colors series, novels based on actual historical crimes. This one takes place in the Blue Ridge Mountains and centers on the Hillsville Courthouse Massacre of 1912.

Some of the other novels in the series have a number of events, such as murders or kidnappings. This one has just one event, the courthouse massacre, and it does not happen until late in the novel. Most of the novel is about Ava, her back story and her romance. This fictional character does have interactions with significant people involved in the massacre, however, they are somewhat minor and not very character revealing. I do wish more of the novel would have been about the actual people involved in the massacre. The massacre could have been more central in the novel with more about the culprits hiding out for days. Also, Basham brings in a whole other fictional group of nefarious men who are involved in the courthouse event. I felt that really muddied the waters, so to speak. I would have rather the novel been about the historical people with fictional ones supporting the plot but not being the central aspect of it.

All that being said, it was an interesting novel and I learned some things about an event the author, a native of the area, had heard about since childhood.

Pepper Basham is an award-winning author who writes romance peppered with grace and humor. She is a native of the Blue Ridge Mountains where her family have lived for generations. She is a speech pathologist and the mother of five. You can find out more at https://pepperdbasham.com/.

Posted by Joan Nienhuis at 2:02 PM