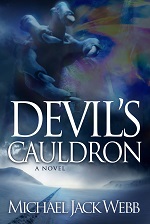 Webb's novel is like Frank Peretti meets Dan Brown. Spiritual warfare is combined with ancient artifacts, advanced technology, visions, people with special blood so they do not age, rifts in space time continuum, quantum teleportation, secret Nazi Antarctic constructions, biblical evil creatures, and more. There is lots of action and suspense and tons of exciting battles. Webb has an amazing imagination.

The novel got off to a rough start for me. Several individuals at various locations are introduced. The people and events seem unrelated and do not come together until well into the novel. This is the second in a series and I did not read the first one. That may account for my confusion at the beginning.

There is a great deal of back story in the novel. Several characters have historical roots that are generously explained. Several evil beings are introduced and their history and worship is also explained. There are Russians and ex-Nazis involved and their history is liberally provided. I have to admit, I started skimming some of those lengthy paragraphs in the second half of the book. There were a few scenes at the beginning of the book that were later recounted by a character, explaining the significance. I think some of that could have been edited out since it was repetitive. There were also many evil spiritual beings. It was a bit much. I think Webb could have focused the spiritual warfare more narrowly.

This novel is for readers who enjoy spiritual warfare on steroids and appreciate lots of historical background information. There was not an author's note in the digital book I read so I was unable to determine what was actual history and what was Webb's imagination.

Michael Jack Webb has loved books as long as he can remember. Now he is writing them. He is an eclectic reader, enjoying topics from quantum physics to archaeology to fantasy. He has traveled widely, setting many of his novels in places he has visited. He earned both a B.A. in History and his J.D. from the University of Florida. He went into the business world where he has been ever since. He and his wife live in North Carolina. You can find out more at https://www.michaeljackwebb.com/ .

Posted by Joan Nienhuis at 6:10 AM