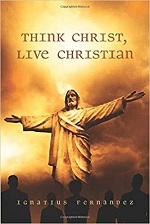 Much of the book is good encouragement for Christians with many stories, examples and quotes from others. Some of this book is rambling teaching, however. An example is Fernandez on prayer. He writes, “Unless the four parts of prayer – adoration, praise, thanksgiving and supplication – are combined in surrender, our prayer is not complete. Our connection with Jesus is not made.” (Loc 1292/4544) Yet he also quotes another, “'A single grateful thought raised to heaven is the most perfect prayer.'” (Loc 1421/4544)

Fernandez is indiscriminate in his sources, something that will dismay evangelical Christians. He quotes Eckhart Tolle, for example (Loc 1092/4544), Deepak Chopra (Loc 2094/4544) and the vice-president of the Buddhist Society (Loc 2307/4544).

Evangelical Christians may also be puzzled by his reference to Veronica, the towel offered to Jesus as He suffered on the cross. (Loc 226/4544). Fernandez may be writing from a Roman Catholic perspective as he says James and Jude were Jesus' cousins, not brothers. (Loc 995/4544) He also references the actions of several Saints.

Some of Fernandez' theology will not be appreciated by evangelical Christians. He writes, for example, of attempts to be holy. “Holiness is not an event. It is a process that happens in stages and grows little by little.” (Loc 211/4544) He also writes, “...Jesus finds everyone lovable. Everyone is his child, whom he takes into his huge embrace...” (Loc 512/4544)

Ignatius Fernandez is the author of twelve books, spanning the topics of religion, spirituality, relationships, parenting, management, and corporate governance. He has spent four decades in various leadership roles including General Manager, Director and Chief Executive. He went into academics as a professor of management studies for MBA and Executive MBA students. He is a post graduate in chemistry and Business Management. He and his wife have four sons. You can find out more at http://www.ignatiusfernandez.com/.

I received a complimentary digital copy of this book through a publicist. My comments are an independent and honest review.

Posted by Joan Nienhuis at 1:06 PM