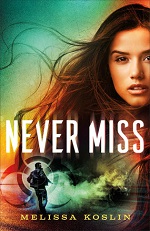 Former CIA sniper Kadance Tolle possesses a special set of skills and a rare pedigree. She comes from a family of assassins, and by saving Lyndon Vaille's life she risks being found by them. Despite the danger, Kadance feels compelled to help Lyndon discover who is after him – and his research that seems to prove that the Ebola virus was manmade and is about to be weaponized.

With shadowy figures pursuing them and a Mastermind watching their every move, Kadance and Lyndon must scramble to stop an impending bioattack at the State of the Union address. But their warnings fall on deaf ears, and it becomes increasingly clear that there's no one they can trust – except perhaps each other.

I expected this to be a suspense novel but it was not. Most of the novel was character revelation and dialog about character revelation. There might be a scene of suspenseful action and then what seemed like pages and pages of Kadance or Lyndon trying to pry family or career information out of the other. Granted, Lyndon's family background has a great deal to do with the impending bioattack. But rather than a few revealing back story sections, the back story for both characters seemed to be the major element of the whole book.

I found it hard to become engaged with the characters. Kadance, an accomplished sniper, seemed to quickly latch onto Lyndon after the opening where she spotted a sniper and saved his life. Lyndon is an unusual character. He had an eidetic memory, three doctorates, a brain that has issues with focusing causing him headaches, yet is muscular and can fight like the best of them. He can also hack into any computer system since one of his doctorates is in cyber security. His personality revelation was almost painful to read.

I did appreciate the apologetics exploration as Lyndon explains how he can be a dedicated scientist and still believe in God. There is also sort of a gospel message included as one of the characters come to accept God's existence.

This is Koslin's debut novel in the inspirational romantic suspense genre. The suspense was periodic and the romance was very different with the emphasis on the characters prying information out of each other. This is a novel for readers who like an emphasis on revealing character personal history and its effects on current actions. Preventing the bioattack is almost a side issue.

Melissa Koslin is a fourth-degree black belt in and a certified instructor of Songham Taekwondo. She is a commercial property manager. She and her husband live in Jacksonville, Florida. You can find out more at

Posted by Joan Nienhuis at 2:22 PM