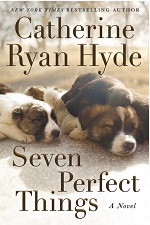 I thoroughly enjoyed this touching novel featuring Katie, a tenderhearted thirteen year old. She sees a man stop his car on a bridge, toss a heavy bag into the river and speed off. She notes parts of the bag are moving. There is something alive inside. A member of her school's swim team, she jumps in braving the cold water and swift current. Grabbing the bag and reaching shore, she rips it open. Out pops the head of a coughing and sputtering puppy. And then another and another. Seven bedraggled puppies in all.

Katie knows her mean father would never allow her to keep them. Her attempt to leave them at the full animal pound fails. The only other option is the abandoned cabin up the mountain from her home. Her plan to save the rescued puppies becomes complicated when the owner of the cabin shows up. Elliot hadn't been to the cabin in years. He's only done so now to clear his mind after the long illness and subsequent death of his wife. Can an unlikely friendship form between a grieving middle aged man and a tender hearted girl with seven puppies to take care of?

Hyde covers some serious issues in this novel. On the one hand is a recent widower dealing with the loss of his his wife from a wonderful marriage. On the other hand is a troubled marriage with Katie and her mom harshly controlled by an abusive man. Hyde has done well to contrast the two situations. When is it right to flee? How can a woman ever feel worthy of respect and love after being so mistreated? And how could one teenage girl ever take care of seven rambunctious puppies?

Hyde's writing style is a pleasure to experience. I found the novel so engaging I zipped through it in two days, all the time rooting for Katie. I hoped so much she would find lasting happiness. It was she who gave us food for thought:

Catherine Ryan Hyde is the New York Times bestselling author of forty books (and counting). She is an avid traveler, equestrian, and amateur photographer. Her novel Pay It Forward was adapted into a major motion picture. Man of her novels have won or been finalists for awards. Over fifty of her short stories have been published in journals and have won or been nominated for awards. She is the founder and former president of the Pay It Forward Foundation and still serves on its board. She is a popular professional speaker as well. You can find out more at www.catherineryanhyde.com.