Peaches and Schemes by Anna Gerard 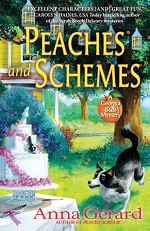 This is the first novel I've read in the cozy Georgia B&B mystery series. While knowing what happened in the previous novels might have helped understand character actions in this one, I felt this story read well on its own. I do like an amateur sleuth and Nina (pronounced nine-ah) is a good one. When someone she knows is strangled, a friend of Nina's is arrested for the crime. Nina must uncover the real murderer by unraveling tangled relationships.

The characters were drawn well. Some were quirky, like Nina's sort of side kick, Harry. He's developing an interesting business. Having appeared in past movies, though not a star, he offers to act as a male companion to women needing one – in public settings only. Need a boyfriend at a family reunion? He's your man. But it does get him in some trouble as he and Nina get closer to revealing the villain.

I like to learn something when I read a novel and was introduced to trypophobia in this one. It describes a person's reaction to seeing a cluster of holes or dots. While unusual, the phobia did play a role in keeping the wrong person from being held for the murder.

Anna Gerard is the pseudonym of Diane A.S. Stuckart, writing cozy mysteries set in the south. She also writes as Ali Brandon and Alexa Smart and is a New York Times bestselling and award-winning author. She is a Texas native with a degree in journalism from the University of Oklahoma. She now lives in southern Florida. You can find out more at https://www.dianestuckart.com/. Photo by James Eisele.

Posted by Joan Nienhuis at 8:06 AM