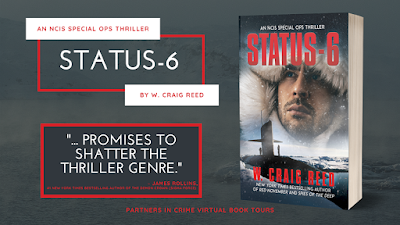 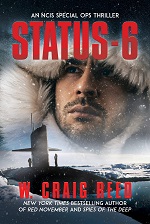 Deep beneath the Arctic Ocean, a covert team of Chinese operatives uses stolen U.S. technology to capture Russia’s newest attack submarine. Loaded with 100-megaton nuclear torpedoes, the sub is headed west. The Americans want to sink her, the Russians want her back, and the Chinese claim they’re not responsible.

NCIS agent Jon Shay is a former SEAL Team Two operator. Still shattered by the murder of his wife a year earlier, he places the barrel of a revolver against his temple, spins the cylinder, and squeezes the trigger. He hears only a click—and the chime of his phone. Activated for a mission in the Arctic, Jon pairs with British scientist Kate Barrett to battle a ticking clock, trained operatives, and top government officials. Together, they must find and stop the world’s most lethal submarine. The stakes are raised when they learn that the Russian sub is controlled by an infected AI system bent on completing its mission to create a nuclear winter.

"W. Craig Reed's latest novel, Status-6, is the best book I've read this year—a ripped-from-the-headlines military technothriller that literally left me awake at night, fearful of where we're headed as a nation and a species. What's next after the nightmare coronavirus pandemic? Don't miss this first book in the NCIS Special Ops series that promises to shatter the thriller genre." -- James Rollins, #1 New York Times bestselling author of "The Demon Crown (Sigma Force)"

"W. Craig Reed's Status-6 grabs you from page one and doesn't let you go. The global security crisis revealed in this book is all-too-real and could well be tomorrow's headlines. The characters are well-nuanced and provide a powerful urge to root for or against them. Don't read this thriller before going to bed—you'll be awake all night!" -- George Gladorisi, New York Times bestselling author of the Tom Clancy Op Center series

I enjoyed this thriller. I like the plot with a few highly trained but rather regular people pitted against a villain's nefarious plan. I like Reed's writing style, providing almost continuous action. I like the advanced submarine technology and cutting edge artificial intelligence. I like the thought provoking aspects of the novel such as government officials creating clandestine operations.

This is a great novel for readers who like special ops thrillers. The characters are well crafted and I found most of them, except the villains, engaging. The action is almost continuous. I did not understand all the military and technology terminology and I have no idea if the underwater vehicles can do all Reed devised, but I trust he got it right.

Put on an extra sweater and get yourself a hot beverage as you plunge beneath the frozen arctic to see if an ex-navy SEAL and a bright scientist can save the world from destruction. It looks like there might be another novel featuring these heroes. I will definitely by watching for it.

Read an excerpt from Status-6:

With his legs sore and lungs burning from the cold, Jon arched his back and stretched when the group finally stopped marching thirty minutes later. To his right, about a quarter-mile distant, the bright blue stripes covering the mess tent signaled the location of the ICEX camp. Two holes, three feet in diameter, had been carved into the ice a few feet from where the group now stood. Jon surmised they were the spent practice torpedo holes drilled by Navy Divers. Liang and company must have parked the ASDS nearby and used the holes as infiltration points. Also, Liang must have had some inside help to deactivate the intruder detection system surrounding the holes. But who? Rinaldo? When would she have had access to that system? More unanswered questions.

Rinaldo approached and said, “Since you’re the former Navy SEAL, why don’t you help our female guest suit up?”

Jon crossed his arms. “This has gone far enough. Time for some answers, Rinaldo.”

Rinaldo pointed her M-16 at Kate’s head. “How’s this for an answer—she suits up or dies.”

Jon uncrossed his arms and fought to quell the ire-stoked coals in his chest. He turned toward Kate. “Are you a certified diver?”

Kate’s nose and cheeks were red. She shivered. “I hate water.”

It didn’t work. Kate looked like a small child being forced to brave a dark alley. “I can’t do this.”

While donning a dry suit, Rinaldo cocked an ear. “What’s the problem?”

Kate stared at the hole in the ice. Frigid blue water lapped against the sides. She backed up and turned away.

“I think she has a water phobia,” Jon said.

“Get her over it,” Rinaldo said.

Jon bristled. The muscles in his face tightened. He grabbed Kate’s suit and brought it to her. Facing her back, he said, “Turn around.” Shaking, Kate remained facing away.

Kate’s eyes met his. Though full of fear, they were riveting, like a blue morning sky touching the edges of a Nebraska corn field. Jon felt his heart flutter. He tried to hold on to the feeling, but it refused to linger. A year had come and gone since he’d lost his wife, but the pain in his chest still held the high ground.

“I’m not setting a foot in that water,” Kate stammered. Her eyes burned with defiance.

Kate crossed her arms and said nothing.

“Just put on the suit to keep the witch happy while I think of something,” Jon said.

Rinaldo called over from the other side of the ice hole. “Five minutes, Shay.”

Jon held up the suit. “Just put it on, please. I promise I’ll think of something.”

Kate rolled her eyes and held out her arms. “Fine, but you’d better not be lying to me.”

“Who’s your colleague?” Jon asked as he moved in close to help Kate don the dry suit.

“Bobby Ruppert. He’s a bit rough around the edges and goes into panic mode in stressful situations, but he’s a brilliant engineer.”

While Jon zipped up Kate’s dry suit, the scent of her perfume conjured a memory. He shivered.

“Now what?” Kate said. Her bottom lip quivered. Annelia had also done that when she was frightened.

Jon pulled on his suit. He stepped toward Kate and said, “Let’s just put on our SCUBA gear and then I’ll make my move.”

“Your move?” Kate shot back.

Jon said nothing as he helped Kate into a BC vest, saddled up her tank, and held a Kirby Morgan diving mask in her direction. “Put this on.”

Kate’s tone turned urgent as she grabbed the mask. “You said you’d think of something.”

“Just follow my lead.” Jon pulled on his tank and ran through a system check. The action felt like a visit from an old friend and reminded him of dozens of missions survived.

Kate shook her head in defiance as she sucked in a breath. The hiss of compressed air echoed off nearby shards of ice pushed skyward by Mother Nature.

One by one, Liang’s men entered the water. Jon watched Kate recoil with each splash.

Kate’s eyes widened. She held her palms up as if to say, “Something?”

Now fully suited, Jon led Kate toward the water. He had to drag her the last few feet. He turned toward her, lifted up his mask, and said, “I’ll hold your hand all the way. This will all be over in five minutes.”

Her eyes still wide, Kate tried to step backward but Jon held onto to her hands and gently kept her in place.

Kate shook her head as she dug her heels into the ice.

Rinaldo slapped Jon’s back. The gesture did not feel friendly.

Jon slowly guided Kate toward the hole’s edge. She fought to pull away. He held on tight and looked into her eyes, assuring her in silence that she could do this. Tears streamed down Kate’s face and dripped onto the mask’s rubber lining. Her breathing was erratic. Jon’s heart ached with compassion and guilt. He felt like a jailor forcing an innocent victim into a torture chamber. The bitter taste of choler filled his mouth as he stole a glance at Rinaldo. The beast in his gut grumbled and demanded to be set loose. Jon closed his eyes and slowly breathed in and out to quell the angst.

He opened his eyes, lifted his mask again, and focused on Kate. Softening his voice, he said, “Close your eyes.”

Kate stared at him through her mask. Jon could tell she wanted to trust him, but fear remained her master. He had seen this kind of panic before on the faces of green wannabe SEALs learning how to dive the Navy way. None of them had ever made it through training. For sure, none of them would have survived a dive in Arctic waters.

“Close your eyes and trust me,” Jon said. “Don’t open them until we’re out of the water.”

Trembling, Kate closed her eyes. Jon pulled on her fins and helped her into a seated position with her legs dangling into the water. He did all this with slow movements so as not to make a splash. Rinaldo stood by and watched with impatient indifference. Jon slipped into the hole…

William Craig Reed is the New York Times bestselling author of thrillers and non-fiction military and business books including Spies of the Deep: The Untold Story of the Most Terrifying Incident in Submarine Naval History and How Putin Used The Tragedy To Ignite a New Cold War and the critically acclaimed Red November (HarperCollins). Also, The Seven Secrets of Neuron-Leadership (Wiley), an award-winning business book, and Tarzan, My Father (ECW) co-written with the late Johnny Weissmuller, Jr.

Reed served as a U.S. Navy submariner and diver during the Cold War and earned commendations for completing secret missions, some in concert with SEAL Team One. Reed’s military experience and inside contacts help infuse his writing with intrigue and realism, and inspired his next non-fiction book, Also, this novel: STATUS-6 about a former SEAL Team Two operator turned NCIS agent that teams with a British female scientist to stop a Russian submarine controlled by an infected artificial intelligence.

Reed holds an MBA in Marketing and was a former vice president and board director for the Silicon Valley American Marketing Association. Reed is the co-founder of Us4Warriors, an award-winning Veterans Non-Profit and serves on the Board of Aretanium, a wellness firm that leverages the neuroscience he wrote about in his leadership book to provide personalized wellness and professional development programs to accelerate brains, careers, and relationships.

I received a complimentary egalley of this book through Partners in Crime Virtual Book Tours. My comments are an independent and honest review. The rest of the copy of this post was provided by Partners in Crime Virtual Book Tours.
(My star ratings: 5-I love it, 4-I like it, 3-It's OK, 2-I don't like it, 1-I hate it.)
Posted by Joan Nienhuis at 6:17 AM

Wow, thank for your great review! This one does like a great book. I usually like movies like this. By the sound of it - it sounds like it would make a great movie! I will have to add it to my list.