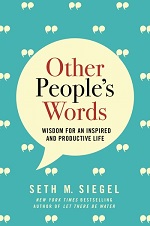 Siegel began collecting quotations as a high school student. He visited a high school in an affluent area of Long Island unlike his own crowded one in a mostly Jewish and Black neighborhood. He noticed quotations on the wall of the social studies classroom. He found them motivating and inspiring and realized their power. He wrote down two on a scrap of paper. That experience was a catalyst and he kept adding notes of scribbled quotations to his collection.

While in college, Siegel began revisiting his quotations, recopying and organizing them. He realized their influence over him as he internalized the ideas. He incorporated them into his developing worldview. He used them as reminders of thought and action as he pursued a career and life after business. Now he shares with us the wise and insightful sayings of hundreds of people.

I appreciate the quotations being divided into sections. Each one relates to a part of our lives. There are quotes on relationships, creativity, leadership, politics and more.  Each quote can be a personal inspiration or a springboard for discussion in a group. They can be used to inspire others in a speech or across a café table.

Here are a few of the many I found thought provoking:

Siegel encourages us to create our own collection of what he calls intellectual companions. Some will last but some will drift away and no longer play an essential role in life. This book gives you a good place to start.

Seth M Siegel is a lawyer, an activist, a serial entrepreneur and the author of the New York Times bestseller Let There Be Water. His writing has appeared in several leading publication in the U.S., Europe and Asia. He is married and lives in New York City. You can find out more at www.SethMSiegel.com. Photo (c) Talia Siegel.

Posted by Joan Nienhuis at 4:38 PM