No Ocean Too Wide by Carrie Turansky 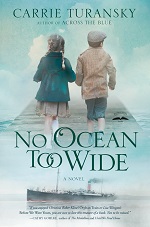 Between the years of 1869 to 1939 more than 100,000 poor British children were sent across the ocean to Canada with the promise of a better life. Those who took them in to work as farm laborers or household servants were told they were orphans – but was that the truth?

After the tragic loss of their father, the McAlister family is living at the edge of the poorhouse in London in 1908, leaving their mother to scrape by for her three younger children, while the oldest daughter, Laura, works on a large estate more than an hour away. When Edna McAlister falls gravely ill and is hospitalized, twins Katie and Garth and eaight-year-old Grace are forced into an orphans' home before Laura is notified about her family's unfortunate turn of events in London. With hundreds of British children sent on ships to Canada, whether truly orphans or not, Laura knows she must act quickly. But finding her siblings and taking care of her family may cost her everything.

Andrew Fraser, a wealthy young British lawyer and heir to the estate where Laura is in service, discovers that his common practice of finding new homes for penniless children might not be all that it seems. Together Laura and Andrew form an unlikely partnership. Will they arrive in time? Will their friendship blossom into something more?

Inspired by true events, this moving novel follows Laura as she seeks to reunite her family and her siblings who, in their darkest hours, must cling to the words from Isaiah: “Fear thou not, for I am with thee: be not dismayed; for I am they God.”

This is an engaging novel based on historical events. I was appalled that overseers in homes for orphaned children in England had the right to gather children for just about any reason. In the story Turansky tells, it was because their mother was temporarily sick. I was also appalled that the children could be sent to Canada without their parent's permission. (206) That was well portrayed in this novel too.

We readers get a vivid idea of how this handling of children could go terribly wrong. Turansky does a good job of showing how some children are brought into homes in Canada and horribly mistreated. Sensitive readers might have trouble reading about some of that treatment. Turansky also paints a clear picture of the social levels in England at the time, especially on the sea voyage to Canada. The travel accommodations for first class passengers was certainly different than those of the emigrating children.

This is a good book for readers who like a novel based on historical events, especially dealing with how penniless children were treated. Turansky's writing style is good and her characters engaging. Readers who liked Orphan Train or Before We Were Yours will like this one.

Posted by Joan Nienhuis at 7:53 AM