He Saw That It Was Good by Sho Baraka 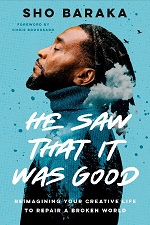 Baraka self describes his book as mostly “musings about people, events, movements, and ideas that I believe could help us cultivate good work and creativity.” (297/335) The core of the book, he writes, is “how the stories we live shape the world around us.” (42/355) I found the book to be insightful and thought provoking, even if a bit rambling in its content.

I'll share some observations and conclusions, noting that I am a white Christian having had experiences in the evangelical, Charismatic, and nondenominational tribes of Christianity. Baraka challenges readers to understand the importance of our tribe in forming our stories and how those stories shape up. He encourages us to have our stories begin with the image of God, forming the basis. He challenges our theology and shares his experiences in Reformed doctrine, appreciating the theological growth but noting the disconnectedness from his heritage. He notes that the church should include consideration of people from all economic and social areas. Christianity is not a religion for only the privileged. “Christianity cannot work for the palace and not the peasant.” (186/355) The church needs the powerful and diverse expressions of faith, from a variety of people and tribes. 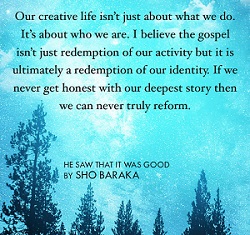 Baraka is a controversial artist. He believes writers and artists are to be honest about their expression of the world. This includes language some might feel offensive. Some of his music has been banned from Christian retail outlets because of the language used. He uses some of that language in this book too, noting it is not for shock value but as an honest expression of life.

This book is a rambling collection of Baraka's thoughts on a variety of subjects. I thought it would be more about being a creating Christian. He does give seven principles that he says will move people to a blessed creative life near the end of the book. These include such concepts as understanding God has given us gifts for the benefit of others and that we are to be content. His writing is more about our lives being a creative expression of who we are than about the traditional concept of being creative, such as in art or music.

I found this book to be a jarring wake up call to those of us living comfortably within our fold of evangelical exceptionalism. He writes here, and has recorded songs, reflecting his honest feelings about racism and misogyny. This book will be an uncomfortable read for Christians who want to sanitize their understanding of Christian life.

Sho Baraka is actually Amisho Baraka Lewis. He attended Tuskegee University and the University of North Texas where he studied Television/Film, Anthropology, and Public Administration. He is avid at making music, writing, acting, giving lectures, traveling the world as an artist, activist and culture curator. He is a co-founder of Fourth District and The And Campaign. He was also an Adjunct Professor at Wake Forest University and original member of the internationally known hip-hop consortium, 116 Clique and record label, Reach Records. He lives in Atlanta, GA with his wife and their three children. You can find out more at https://www.barakaology.com/home.