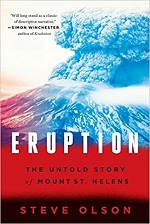 Like many in the Pacific Northwest, I remember exactly where I was on May 18, 1980 a little after 8:30 when I heard a pop. Living near a military base, noise was frequent and I assumed it was something happening there. It was not until after church I turned on the car radio and realized I had heard a volcano erupt about 150 miles away.

It has been over 40 years ago and it was good to revisit the experience through Olson's book. He explores much more than just the eruption. He looks at the logging industry and how the industry impacted who was and was not near the volcano that morning. He reviews the geologists and how they studied what was the most active volcano in the U.S. over the last four millennia. He writes about the people living close to the mountain and the attempts to keep them in areas deemed safe as the volcano rumbled to activity. He recounts the experiences of those caught in the deadly blast and the recovery of those who survived.

I appreciate Olson's book. I understand more about volcanoes and the types of eruptions, such as phreatic, producing devastating clouds of ash. I realize the geologists, in their analysis of the activity of St. Helens, did not anticipate a lateral blast, low in probability but high in consequences. I appreciate the lessons learned because of the deadly blast.

Olson has a pleasant writing style. While some may not appreciate the pages spent on background information, I did. I highly recommend this book to those who enjoy reading about natural events and how they collide with humanity.

Steve Olson is the award winning author of several nonfiction books. Eruption was the winner of the Washington State Book Award. While generally a freelance writer and editor, he spent three years as a writer in the White House science office. He has had articles appear in many magazines. He lives in Seattle, WA. You can find out more at https://steveolson.com/.

Posted by Joan Nienhuis at 7:01 AM