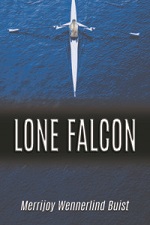 What if you had to choose between your friends and your faith?

It is 1971. Eighteen year-old Carrie Falconer goes to college and joins the rowing team, where she receives praise and popularity for the first time. She also finds her first boyfriend. Not just anyone, but the heart-throb men’s crew captain! As coxswain of the varsity squad, she leads her team to four gold medals, allowing them to qualify for Nationals. However, while pursuing her collegiate dreams, she has left behind most of her traditional religious beliefs. While preparing for the National tournament, she is hit by a life changing consequence and is forced to decide between pleasing her team or letting them down by following what she believes to be the right path.

I enjoyed this coming of age story taking place in the early 1970s. It was a time of change for young women. Roe Vs Wade made abortion legal and many young women were taking advantage of it. But what about Carrie, a somewhat naive Christian girl taken in by a suave hunk of an athlete? What will she do when her choices lead to a life she had never imagined?


Buist explores several issues in this novel. I remember my own parents struggling over the cost of a Christian college and the dangers of going to a secular university. Carrie came from a family where her father valued the son and his athletics so much Carrie felt almost like an outcast. That made me think about parental attitudes and how they influence the decisions young people make. Another issue was making a terrible mistake and knowing God forgives but not being able to forgive ones self. And then there is the whole issue of hiding sins so people in the church won't know about failures. What people won't do to save their reputation!

This is a good novel for young people and for parents. It has thought provoking issues for both. And you'll get to learn quite a bit about women's crew at the University of Washington during the time.

The first four chapters of Lone Falcon and the general plot were written when Merrijoy Wennerlind, was a student at the University of Washington. The rest was finished up years later by Merrijoy (MJ.) Buist who worked hard to keep her 24-year-old spirit alive.

MJ. is currently a Diaconal Minister at the Anaheim United Methodist Church. A native of Seattle and a UW graduate, she lives in Santa Ana, California with her husband and two sons. She is currently working on the sequel, Lone Choices, which tells how Carrie lives out her decision. You can reach MJ. at her facebook page: Merrijoy Wennerlind Buist@mjwb

How far would you go to research your book? Would you sit on a narrow crew boat with eight other women and learn to row? That’s what I did to get a feel for what my main character, Carrie Falconer, in Lone Falcon experiences as she joins and excels in the college crew team. Why did I choose rowing over another sport? I couldn’t resist the metaphor of steering your own boat, which led me to the sport of rowing and its navigator, the coxswain. I fell in love with the idea of choosing your own path and what happens when one goes off course. You, the reader, will follow Carrie from her strict Christian upbringing to attending a secular college, experiencing her joys and victories as she rises to popularity, and of her first love, the hunky Lenny, men’s team captain. You will struggle along with her as she makes a life decision of whether to turn back to her faith or do what her friends ask. I originally wrote Lone Falcon in response to all the Young Adult (YA) books and T.V. shows of the times which said, “Your parents and their beliefs are all wrong, do what your friends and the times say.” In the wisdom I’ve acquired in my years of mothering, earning my master’s degree, and becoming a Minister, I adjusted my theme to making your own choices, not what others and society may tell you to do. I hope this book will encourage other brave young women to live up to what they believe within and not be influenced by what others without tell them to do.

This book sounds like an intriguing and really good read. and I love the time period that this is set in.

I have only rowed a canoe a couple of times. Can't imagine doing it in a competition -- I'd lose!

I think the decision to follow God or your friends/interests is one that most of us have to make at some point in our lives. It's often a painful decision. Thanks for your review.

Looking forward to reading this one!

Great review! Thank you for sharing!

This sounds like a great book, thanks for the review.