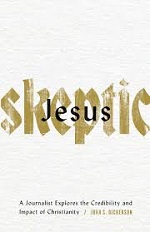 Some modern atheists would have us believe Jesus is a myth and Christianity has been nothing but trouble. But what does the evidence say? Did Jesus really exist? What has been the influence of Christians in the world?

That is exactly what Dickerson set to find out. He spent ten years doing the same kind of investigation he did for his award winning journalism. He started out a professional skeptic but what he found out astounded him.

I like Dickerson's approach in that he concentrated on Primary Evidence. He investigated original documents and first hand reports, ones not from the Bible. The evidence is astounding. Dickerson shows how Christians and Christian ideas shaped higher education, science, medicine, public education, and more. The evidence is overwhelming and points out how followers of Jesus have made life so much better for so many people.

And Jesus? The evidence from nonblical historical sources shows that Jesus lived, just as the Bible accounts report. Dickerson also shows how Jesus is the most influential person who ever lived, by far.

I like that Dickerson has included reproductions of many of the source documents. We can see the evidence for ourselves. And if we want, we can check out his evidence at https://www.jesusskeptic.com/ .

Dickerson has provided skeptics of Jesus and Christianity with a great deal of evidence. Does he cover everything? No. Does he balance his investigation by noting areas where Christian influence has hindered civilization advancement? No. Does he compare Christianity's influence in the world with that of other religions? Not really.

Dickerson is now a pastor so potential readers should know this book is ultimately a defense of Christianity. I think it is a good one. If you are a skeptic, it is definitely worth considering.

John Dickerson is a prize-winning journalist, a Millennial, and a bestselling author. His writing has appeared in The New York Times and USA Today and has earned dozens of honors, including the Livingston Award for Young Journalists, given by Tom Brokaw of NBC News and Christiane Amanpour of CNN and ABC News. Today he serves as lead pastor at Connection Pointe Christian Church in the Indianapolis metro area, where he lives with his wife and children. You can find out more at http://www.johnsdickerson.com/

I received a complimentary uncorrected digital galley from the author. My comments are an independent and honest review.
Posted by Joan Nienhuis at 6:27 AM