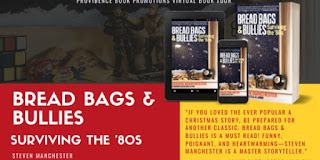 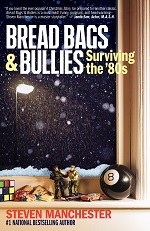 It’s the winter of 1984. Twelve-year-old Herbie and his two brothers—Wally and Cockroach—are enjoying the mayhem of winter break when a late Nor’easter blows through New England, trapping their quirky family in the house. The power goes out and playing Space Invaders to AC DC’s Back in Black album is suddenly silenced—forcing them to use their twisted imaginations in beating back the boredom. At a time when the brothers must overcome one fear after the next, they learn that courage is the one character trait that guarantees all others. This hysterical coming-of-age tale is jam-packed with enough nostalgia to satisfy anyone who grew up in the ‘80s or at least had the good fortune to travel through them.

“If you loved the ever popular A Christmas Story, be prepared for another classic. Bread Bags & Bullies is a must read! Funny, poignant, and heartwarming—Steven Manchester is a master storyteller.” – Jamie Farr, Actor, M.A.S.H.
“Bread Bags & Bullies is a detailed eye-opening experience of the Big Hair decade. Enjoyable whether you were there or not—or just can’t quite remember it.” – Barry Williams, Actor, The Brady Bunch
“Steven Manchester’s Bread Bags & Bullies captures a simpler time, just before technology began dominating America’s time and attention. This nostalgic story is hilarious, told by a family of characters you won’t soon forget. A must read!” – Ed Asner, Actor, Lou Grant
“Steve Manchester’s Bread Bags & Bullies is a fantastic blast from the past, evoking all the fun and nostalgia of the ‘80s—even my big hair!” – Audrey Landers, Actress, Dallas
“An extraordinary recall of 1980s pop cultural, Bread Bags & Bullies will make you laugh out loud as you revisit the pains and pleasures of growing up. The book made me want to pick up the phone, call my brother in Nebraska and reminisce about our own snow day adventures.” – Douglas Barr, Actor, The Fall Guy
“In Bread Bags & Bullies, the writing is so vivid, the pace and rhythm so quick, that I truly felt I was watching it on screen.” – Joan van Ark, Actress, Knots Landing
“Steven Manchester’s latest book, Bread Bags & Bullies, made me recall the town I ‘grew up in’— mythical Mayfield. Instantly taking you back to 1984, the characters and situations are so believable that you’ll want to keep turning the pages.” – Tony Dow, Actor, Leave It to Beaver
“It’s always fun to be a part of history and pop culture. Reading the Waltons’ famous ‘Goodnight, John-boy’ referenced in Bread Bags & Bullies was a special treat—especially since the reply was ‘Night, Erin.’” – Mary McDonough, Actress, The Waltons
“A determined effort. Bread Bags & Bullies rocks!” – Billy Squier, ‘80s Rock Icon, Stroke Me
“You can like this book if you want to. You can leave your friends behind. Because if your friends don't like this book…well, they’re no friends of mine.” – Ivan Doroschuk, Lead Singer of Men Without Hats, Safety Dance
“In Bread Bags & Bullies, Steven Manchester captures the ‘80s to the smallest detail. With each page turned, memories flood back. Using the lightest of touch, he tells his story with tongue firmly planted in cheek. Bread Bags & Bullies is a delight!” – Nick van Eede, Lead Singer of Cutting Crew, Died In Your Arms
“Steve Manchester’s newest novel, Bread Bags & Bullies, is a well-written love letter to the ‘80s—bringing me home with every page turned.” – Bertie Higgins, ‘80s Recording Artist, Key Largo “Bread Bags & Bullies is so—like, totally—‘84, it makes me want to get out my leg warmers and glow sticks, backcomb my hair, and romp around the room to Footloose. And then I remember, I don’t have any hair.” – Thomas Dolby, ‘80s Recording Artist, She Blinded Me with Science “Manchester’s book, Bread Bags & Bullies, brings to mind many of our techno ditties. ‘How you gonna keep ‘em down on Maggie’s Farm once they’ve seen Devo?’” – Gerald V. Casale of DEVO, Whip It

This novel certainly took me down memory lane to the mid 1980s. The family story of three boys bickering, farting, playing Atari, and conniving was a bit of a shock for this reader having had all sisters. I wasn't quite ready for the foul language either. At times I felt like I was wandering down the aisles of a store with all the brand names. Pop didn't just watch TV, he watched the Zenith, for example. Ma didn't just smoke a cigarette but a Carlton 100. And the humor? Well, the boys laughed lots at their antics but I think you either had to be there or be a boy to often find the humor.

The strength of this novel was the contemporary reminiscing by Herbie, the middle son in the family. His realization of the lessons learned and character formed during his tumultuous childhood was charming.

This is a good book for readers who want to revisit a winter childhood experience in the 1980s or be introduced to it. Manchester's writing style is a fine one and easy to read. This novel isn't my favorite of his but I do like his work and will be looking for the next one.

Steven Manchester is the author of the #1 bestsellers Twelve Months, The Rockin' Chair, Pressed Pennies and Gooseberry Island; the national bestsellers, Ashes, The Changing Season and Three Shoeboxes; and the multi-award winning novels, Goodnight Brian and The Thursday Night Club. His work has appeared on NBC's Today Show, CBS's The Early Show, CNN's American Morning and BET's Nightly News. Three of Steven's short stories were selected “101 Best” for Chicken Soup for the Soul series. He is a multi-produced playwright, as well as the winner of the 2017 Los Angeles Book Festival and the 2018 New York Book Festival. When not spending time with his beautiful wife, Paula, or their four children, this Massachusetts author is promoting his works or writing.

This is a rafflecopter giveaway hosted by Providence Book Promotions for Steven Manchester. There will be 7 winners. Two (2) winners will each receive an Amazon GC and five (5) winners will each win one (1) copy of Bread Bags & Bullies: Surviving the '80s by Steven Manchester (eBook). The giveaway begins on November 1, 2019 and runs through January 2, 2020. Void where prohibited.

I too am a big fan of this author and enjoyed being taken down memory lane.

I remember the '80s and this sounds like a great read.