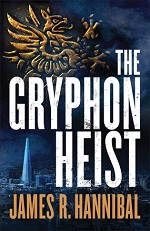 This is an action packed novel with a very complex plot. A newly graduated CIA agent is sent on an assignment worthy of a seasoned operative. There are many amazing futuristic vehicles and activities like a man flying through the air. The action is over the top, beyond what one would think reasonably possible.

There is a wide collection of characters. Most of them seem to be of mixed allegiance and I had difficulty figuring out who was on which side. Perhaps that was Hannibal's intent, to keep me guessing who would end up being the good guys. Rather than finding that aspect of the book intriguing, I found it irritating.

And I always find it interesting when a male author plots a female lead character. Perhaps that is why I didn't like her. She was all over the place as far as pursuing her task. Granted, she was a new agent but I think we women are better than portrayed here.

There is next to no Christian faith content in the book, even though it was published by a “Christian” publisher. This is a book for readers who like lots of incredible action as a newly minted CIA agent and her odd band of people save the world.

You can read an excerpt here and watch the book trailer here.

James R Hannibal is a former stealth pilot and two-time Silver Falchion Award winner for his Section 13 mysteries for kids and a Thriller Award nominee for his Nick Baron covert ops series for adults. He is a rare multi-sense synesthete, meaning all of his senses intersect. He sees and feels sounds and smells, and hears flashes of light. He lives in Houston, Texas. Photo Credit: DigiSmiles Photography