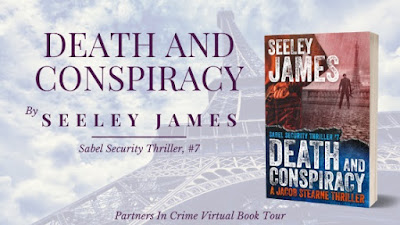 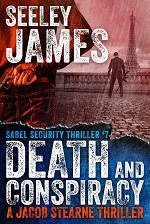 Is Jacob Stearne a terrorist or a hero?


After fabled Ranger Jacob Stearne kills two terrorists before they can shoot hundreds of worshippers, he’s sent undercover to disrupt their neo-Nazi group’s plans for a global religious war. But the CIA agent who sends him on his mission may not be who he claims.

In his search for the dangerous terrorists, Jacob finds himself manipulated by international agencies, used gods, potential lovers, and racists alike. Everyone wants him to believe something he doesn’t. While infiltrating a neo-Nazi gathering, he must handle both warring factions and authorities who believe he’s the real terrorist.

Death & Conspiracy poses the question: Could you befriend white supremacists to stop mass-shootings?

This was my first adventure into the world of Jacob Stearne and it was exciting. The novel has a bit of a twist on the one man saves the world idea. He has a spent god, Mercury, for a side kick. That added some humor but I also think it detracted from the hero's mystique. Mercury frequently gives Jacob information he could not know on his own. I would have been more impressed with Jacob if he had battled forces with just his own super abilities. He also has the aid of the well resourced security firm he works for. You know, a firm that seems to have unlimited financial resources, can hack into any surveillance system, etc. That is more common to novels of international suspense.

I think the strength of this novel was the exploration of extreme white supremacist philosophy and the terror they want to inflict on the world.

This is a good novel for readers who enjoy suspenseful international intrigue. There are many deceptive characters frequently fooling our hero. There are many dangerous situations where Jacob could face his last nemesis. Potential readers who are Christians or faithful to another religion may be offended by the critical comments of the god Mercury toward them. Otherwise a good novel of international suspense.

His near-death experiences range from talking a jealous husband into putting the gun down to spinning out on an icy freeway in heavy traffic without touching anything. His resume ranges from washing dishes to global technology management. His personal life ranges from homeless at 17, adopting a 3-year-old at 19, getting married at 37, fathering his last child at 43, hiking the Grand Canyon Rim-to-Rim at 59, and taking the occasional nap.
Seeley's love of creativity began at an early age, growing up at Frank Lloyd Wright’s School of Architecture in Arizona and Wisconsin. He carried his imagination first into a successful career in sales and marketing, and then to his real love: fiction.
His writing career ranges from humble beginnings with short stories in The Battered Suitcase, to being awarded a Medallion from the Book Readers Appreciation Group. Seeley is best known for his Sabel Security series of thrillers featuring athlete and heiress Pia Sabel and her bodyguard, veteran Jacob Stearne. One of them kicks ass and the other talks to the wrong god.


Catch Up With Seeley James On:
SeeleyJames.com, Goodreads, BookBub, & Facebook!

Visit these other great hosts on this tour for more great reviews and giveaways!
Click here to view the Death and Conspiracy by Seeley James Participants