Don't Tell Me It Can't Be Done by Ray Barnett 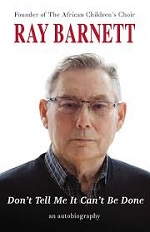 This is an amazing memoir of Ray Barnett, the man who originated the African Children's Choir. In the fall of 1983, Barnett was in Kampala, meeting with the prime minister of Uganda. The civil war was the cause of many orphans and suffering children. Money wasn't the answer, Barnett argued. People needed to see the hope and potential of the African child. The idea for a children's choir was born.

The memoir takes us back to Barnett's childhood and the surprising discovery he had not been birthed into the family he thought was his. What a painful experience he had finding his birth mother and realizing she still didn't want the role. He takes us through his conversion, his founding of a nonprofit (Friends in the West), his journeys and his compassionate work across the globe.

I recommend this book. It is an interesting account of God working in a variety of ways to have Barnett help others, from the release of imprisoned Christians and hostages to showing the world the amazing energy of African children. Barnett is a tenacious man. This memoir gives good evidence to what God can do through one determined to do good to others throughout the world.

You can watch videos and order the book at https://www.raybarnett.com/about-the-book/

Ray Barnett, a Northern Ireland-born minister who immigrated to Canada in the late 1950s, has devoted his life to helping suffering and persecuted people around the world.
He is the founder of Friends in the West, a Christian based human rights organization that has helped secure the release of numerous Christians imprisoned for their faith, and has spearheaded humanitarian aid missions in volatile regions across the globe.
He is also the founder of the African Children’s Choir, a world-renowned organization that has provided an education, healing and hope to thousands of African children, including nearly 1,200 who have gone through the African Children’s Choir program. With “Daddy Ray” as their advocate, these children have been cared for as one of his own, receiving the love, support and education they need to succeed and give back to Africa and the world.
Ray has received numerous honors and recognitions for his work including the prestigious “Cross of Nails” award issued by the Coventry Cathedral in England as well as the “Heart of Gold” award bestowed by Esther Ranson at BBC. In early 2019, he was crowned Maasai Elder in Kenya in honor of his contributions to Maasai children. His lifelong work has also been spotlighted in Daddy Ray, a documentary produced by acclaimed BBC producer Desmond Wilcox. You can find out more at www.raybarnett.com

I received a complimentary digital copy of this book through Presto Public Relations. My comments are an independent and honest review.
Posted by Joan Nienhuis at 6:12 AM