I've Seen the End of You by W Lee Warren MD 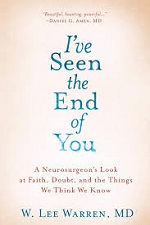 Warren is a brain surgeon and a man of faith. He shares his struggles of seeing so many with brain tumors (glioblastoma) and a hopeless prognosis while believing in a God who can heal but most often does not.

Warren shares many of his experiences with patients, changing names to protect their memory. There is the good guy with the tumor so extensive there is no remedy. It will kill him. There is the bad guy whose tumor was found and operated on and will live another day. There is Warren's own self doubt when surgery does not go as planned. There is guilt at an unexpected death. There is the 18 month old, severely shaken by a drunken boyfriend who had been using the child as a punching bag for some time. There were families taken in by fraudulent cures, spending their life savings. There were prayers answered, just not in the way Warren had expected.

I like that Warren includes many life lessons learned from his experiences. One example is focus. A surgeon can focus so much on the immediate narrow problem, a deadly problem nearby may be ignored. One needs to maintain perspective, being able to see the narrow problem but also the larger issue. He shares how he helps people learn to live in a painful world of the deadliest cancer.

This is an engaging memoir. Warren's writing style is captivating. I am amazed at and have great respect for those who work in emergency rooms and deal with head traumas. Readers with weak stomachs may have difficulty with some of the head trauma descriptions.

Warren notes that he wrote this book to help people navigate the path of faith and doubt and loss. The latter he experienced when his own son died. I think he achieved his goal. The book is a very good one for Christians troubled by the place of faith in their painful lives.

You can read the first three chapters here.

W. Lee Warren, MD, is a brain surgeon, inventor, Iraq War veteran, and writer. His most recent book, No Place to Hide, was named to the 2015 US Air Force Chief of Staff's Professional Reading List. Dr. Warren has appeared on The 700 Club and CBS Evening News and his writings have been featured in Guideposts magazine. He plays the guitar and loves to make connections between faith, science, and the realities of life. Dr. Warren lives in Wyoming with his wife.

I received a complimentary ARC of book from the publisher. My comments are an honest and independent review.
Posted by Joan Nienhuis at 2:41 PM