A Small Book for the Anxious Heart by Edward T Welch 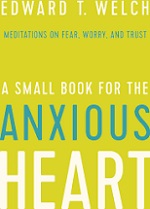 Welch must be writing for very new Christians or ones not familiar with the Bible. He has a meditation on confession, for example, that seems to be for those who don't know we are commanded to confess our sins nor know the benefits of doing so.

I am a little concerned about the accuracy of the writing. For example, Welch writes, “Anything of values comes through perseverance.” (Loc 195/1710) (Italics in the original.) My goodness. What about grace, mercy, the free gift of salvation? Welch is encouraging, but should also be correct! He updates Psalm 23 “in a way David would certainly have approved.” (Loc 237/1710) Welch knows what David would think about the update? And how about this? “For now, know that there are good reasons to worry.” (Loc 340/1710) I thought for sure Jesus told us not to worry, that there were no good reasons to worry for our heavenly Father takes care of us. (Matt.6:25ff)

Welch writes often from a human viewpoint. For example, fears and anxiety are not necessarily sinful nor a result of sin, he writes. “Fears and anxieties reveal that you are a finite human who can control very little.” (Loc 506/1710) I would rather he said fears and anxieties indicate you do not believe God cares for you nor that God is sovereign. I found it interesting Welch again mentioned fears are not necessarily a result of sin but then has a meditation on the relationship of fears and hidden sin. (Loc 659/1710, 1044/1710) In that later meditation, he directly relates anxiety to hiding sin. (Loc 1044/1710)

Welch is very compassionate in his writing, almost to the point of glossing over sin. We have plans and dreams, he writes, but we might “forget” that “[the] Father is in control.” (Loc 677/1710) He then encourages us to trust the Father and rest in Him.

I was a little shocked at Welch's experience with prayer. He writes that he has spent 30 years on shortening the time between the appearance of anxiety and the onset of prayer, generally getting it down to an hour. (Loc 717/1710) When he prays, the peace of Christ does begin to rule in his heart and mind but it “still takes him by surprise.” (Loc 717/1710) That just made me shake my head. Later he writes about prayer, “confessing my own weaknesses...still feels unnatural.” (Loc 738/1710) This, even though later he writes of the necessity of being transparent before God. (Loc 1059/1710)

Perhaps Welch's book structure mirrors the work of dealing with anxiety. He starts off very slowly but eventually gets to ways of dealing with anxiety like confession, prayer, believing God is greater, living in the present, believing God will take care of needs, etc. But then, on Day 40, he writes, “In this world, getting rid of all your worries is not an option.” And, “The absence of all fear...awaits the age to come.” (Loc 1361/1710, 1388/1710) So I am not sure what the purpose of this book is. It puzzles me. Perhaps Welch wants readers to expect to always have fear and anxiety to battle and turn over to the Lord. I'd rather live in victory, truly believing God is sovereign and is working all things to my ultimate good. I can rest there with no fear nor anxiety.

Edward T Welch is a licensed psychologist and faculty member at the Christian Counseling & Educational Foundation. He has a PhD in counseling from the University of Utah and a MDiv from Biblical Theological Seminary. He has been counseling for over 30 years and has written extensively on depression, fear, and addiction.

I received a complimentary egalley of this book from the publisher. My comments are an independent and honest review.
Posted by Joan Nienhuis at 11:09 AM