Anarchy of the Mice Blog Tour 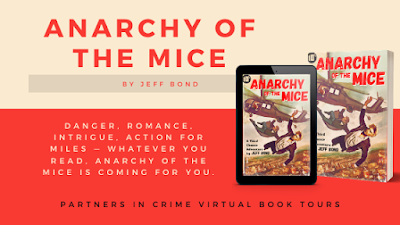 Anarchy of the Mice 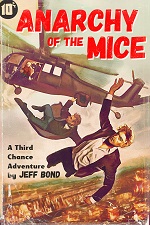 From Jeff Bond, author of Blackquest 40 and The Pinebox Vendetta, comes Anarchy of the Mice, book one in an epic new series starring Quaid Rafferty, Durwood Oak Jones, and Molly McGill: the trio of freelance operatives known collectively as Third Chance Enterprises.

How far could society fall without data? Account balances, property lines, government ID records — if it all vanished, if everyone’s scorecard reset to zero, how might the world look?

The Blind Mice are going to show us.

Molly McGill is fighting it. Her teenage son has come downstairs in a T-shirt from these “hacktivists” dominating the news. Her daughter’s bus is canceled — too many stoplights out — and school is in the opposite direction of the temp job she’s supposed to be starting this morning. She is twice-divorced; her P.I. business, McGill Investigators, is on the rocks; what kind of life is this for a woman a mere twelve credit-hours shy of her PhD?

Then the doorbell rings.

It’s Quaid Rafferty, the charming — but disgraced — former governor of Massachusetts, and his plainspoken partner, Durwood Oak Jones. The guys have an assignment for Molly. It sounds risky, but the pay sure beats switchboard work.

They need her to infiltrate the Blind Mice.

Danger, romance, intrigue, action for miles — whatever you read, Anarchy of the Mice is coming for you.

Starting a Bond book is like getting a grab bag, wondering what's going to be inside. This novel is a venture into the unknown. I felt like it had a cast of thousands. It went from tunnels to helicopters and from New Jersey to Paris. There were more explosions than I could count. There was technology galore from 3D images to software erasing everything about a business, including its money, to weaponized vegetation. The characters managed to get out of more impossible situations than I thought could be included in a novel. Bond certainly does have an imagination.

There are some aspects of the novel that caused me to like it less than I might have. I did not find the characters engaging nor well developed. The plot centered on tons of action and much less on creating characters catching my interest. They just were not likable. And then the changes in point of view. Some chapters are first person from Molly's viewpoint. Other chapters featuring Quaid and Durwood were from the universal viewpoint. Except the odd chapters 69, universal, 70, first person Molly, then 71, universal but with Molly in it. Just a bit too strange for me.

This is a good book for readers who like a long book with lots of action, many impossible situations, lots of technology, a multitude of characters and settings, and not much of a character arc.

Jeff Bond is an American author of popular fiction. His books have been featured in The New York Review of Books, and his 2020 release, The Pinebox Vendetta, received the gold medal (top prize) in the 2020 Independent Publisher Book Awards. A Kansas native and Yale graduate, he now lives in Michigan with his wife and two daughters.

Visit these other great hosts on this tour for more great reviews, interviews, guest posts, and giveaways!
Click here to view the Anarchy Of The Mice by Jeff Bond Participants.

Thanks for taking a look at another of my books, Joan -- I always enjoy hearing your take!