The Finders by Jeffrey B Burton 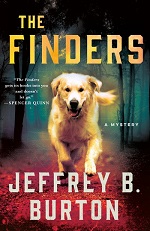 I enjoyed this mystery. It has everything I like in one. First off, it was clean in that it had only a few objectionable words and those were appropriate. The mystery was well presented and I had no idea who the villain was until the author revealed the person. Burton's writing style is good as was the pace of the action.

I liked the characters and felt they were developed well. Mace, our hero, is recovering from a divorce but is getting ready to think about women again. I liked Kippy too. Coming out of a very painful end to a relationship, she is extremely hesitant to think about entering into another relationship. I really appreciate there was no token graphic romantic scene.

I like to learn a little something when I read a novel and was happy to read about dogs being trained for cadaver discovery. I really liked how Burton gave a rescue dog special abilities. While unusual, it seemed entirely plausible, especially given the discussion about human abilities. Once and a while an Einstein comes along and it may very well be the same in the world of dogs.

I recommend this mystery to readers who like one plotted well and with engaging characters. It would be especially appreciated by dog lovers. I'll be looking for the next in this series.

Jeffrey B Burton was born in Long Beach, California, grew up in At. Paul, Minnesota, received hi BA in Journalism at the University of Minnesota. He has written three previous novels and his short stories have appeared in dozens of magazines. He is a member of the Mystery Writers of America, International Thriller Writers, and the Horror Writers Association. He lives in St. Paul with his wife, a Pomeranian and a Beagle. You can find out more at https://jeffreybburton.com/index.html Photo: Cindy Archer-Burton.

I received a complimentary egalley of this book from the publisher. My comments are an independent and honest review.
(My star ratings: 5-I love it, 4-I like it, 3-It's OK, 2-I don't like it, 1-I hate it.)
Posted by Joan Nienhuis at 5:43 PM