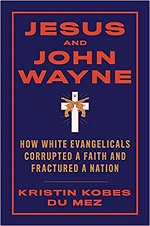 I read this book in my ongoing attempt to understand the current political situation in the U S and the role evangelical Christians had in creating it. While Du Mez concentrates on the “evangelical cult of masculinity,” there is also a good deal of information about evangelicals in general and the development of Christian nationalism. She writes, “understanding the catalyzing role militant Christian masculinity has played over the past half century is critical to understanding American evangelicalism today, and the nation's fractured political landscape.” (304)

Du Mez follows the development of the male Christian as a warrior, including the books and the movements. Especially after 9/11, she notes, views were promoted that “God created men to be aggressive – violent when necessary...” (185) Gone was turning the other cheek. Men “were created in the image of a warrior God...” (185) It was no surprise that a 2017 survey found 41 percent of white evangelicals own guns, significantly higher than the 30 percent of Americans overall. (296)

She also details how the Religious Right kindled fear in the hearts of American Christians, that their white Christian culture was dissolving before their eyes. (253) They wanted a militant male to protect their rights, someone not confined by political correctness. Enter Donald Trump.

One of the conclusions Du Mez drew shocked me. “Two years into Trump's presidency, more than two-thirds of white evangelicals did not think the United States had a responsibility to accept refugees.” (297) She notes the Bible is full of admonitions to welcome the stranger and care for the foreigner. Only 12 percent of evangelicals cited the Bible as their primary influence when it came to their views on immigration. (297) These are evangelicals, people who claim the Bible is their authority. Apparently it is not. That confirmed what Du Mez wrote early on, that there was “high levels of theological illiteracy” among evangelicals meaning that many of them held views traditionally defined as heresy. (6)

This is a book for those who want to understand how Christian men became gun toting warriors and how that influenced the role evangelicals played in the 2016 U S election.

Kristin Kobes Du Mez is a professor of History and Gender Studies at Calvin University. She received her PhD from the University of Notre Dame. She has written for several publications and has been interviewed by many major media outlets. She blogs at Patheos's Anxious Bench. She lives in Grand Rapids, Michigan. You can find out more at https://kristindumez.com/