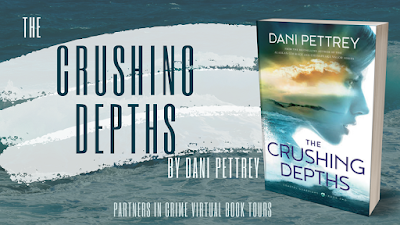 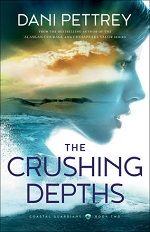 When an accident claims the life of an oil-rig worker on the first drilling platform off the North Carolina coast, Coast Guard investigators Rissi Dawson and Mason Rogers are sent to take the case. Tensions surrounding the oil rig are high and the death has everyone on edge. Environmental activists are threatening to do whatever it takes to stop the structure from being completed, while rumors are being whispered about ancient curses surrounding this part of the ocean.

Mounting evidence shows the death may not have been an accident at all. Was he killed by one of the activists or, perhaps more frighteningly, a member of his own crew? Rissi and Mason have to sort through not only a plethora of suspects, but also their own past and attraction to each other.

Just as the case seems like it'll break open, worse news arrives. A tropical storm has turned their way and soon they're cut off from any rescue–and right where the killer wants them. It's a race to discover his identity before he eliminates the threat they pose.

Pettrey has crafted another entertaining novel centered on Coast Guard investigators. I liked the setting of an off shore oil rig although I wish we could have learned more about its operation. The sabotage of the rig operation by an environmental group is certainly believable.

I liked the budding romance between Rissi and Mason. I like that Pettery kept them focused on their work and did not let their emotions rule during the investigation. I also liked how both of the characters rose above their shared painful youth experiences, independently became Christians, and found renewed love as adults.

I did not like Brooke's side story and found it very distracting. It did not add to the main plot story and almost seemed like just filler to make page count. The main plot would have been sufficient to provide an entertaining read with additional background on oil rig function. I also found the fights by a couple of the men on the rig to be nonessential to the plot and a bit puzzling as to their inclusion.

This is an entertaining novel with a little bit of information about off shore oil rigs and protesters. I do not think it is the best Pettrey has written. I do like her work though and will be looking for her next book.

Late September
Thirty-eight miles off North Carolina’s coast
Greg Barnes clinked along the grated metal steps, his boot heels rasping with each shuffle as he headed topside for a much-needed breath of smoke.
Thrusting the door open with a resounding creak, he stepped out into the night air.
A litany of protestors’ chants mimicked the shrill whining of cicadas.
He glanced at his watch. 1930. Didn’t those eco-nuts ever give it a rest?
As if the cursed rig wasn’t enough—they had the dang relentless protestors going practically day and night.
Exhaling, he rubbed his thumb along the smooth surface of the tarnished gold lighter in his pocket. His tight muscles seized, making his movements stiff. He shook his head. Those people needed to get a life.
Edging around the far corner of the main separator facility, he pressed his back against the structure’s cool outer wall. Generators whirred across from him, finally drowning out the clatter. He scanned his surroundings and exhaled in relief. Finally, alone.
His leg twitched. Just one drag . . . maybe two. It’d been an awful day, and that was the gentleman’s way of putting it.
With unsteady hands, he pulled the plastic-wrapped pack from his shirt pocket.
It crinkled beneath his hold and the sweet scent of tobacco wafted beneath his nose. He tamped the cigarette in his palm and slid it between his cracked lips. Just one drag.
Tugging the lighter from his pocket, he flipped it open, then rolled the pad of his thumb across the ignitor.
A spark flashed and fire roared, hissing over him in a sizzling cascade of torment.

Praised by New York Times best-selling author Dee Henderson as "a name to look for in romantic suspense," Dani Pettrey has sold more than half a million copies of her novels to readers eagerly awaiting the next release. Dani combines the page-turning adrenaline of a thriller with the chemistry and happy-ever-after of a romance.
Her novels stand out for their "wicked pace, snappy dialogue, and likable characters" (Publishers Weekly), "gripping storyline[s]," (RT Book Reviews), and "sizzling undercurrent of romance" (USA Today).
Her Alaskan Courage series and Chesapeake Valor series have received praise from readers and critics alike and have appeared on the CBA, ECPA, Publisher’s Weekly, and Amazon #1 bestseller lists. Dani has also been honored with multiple awards, including the Daphne du Maurier Award, two HOLT Medallions, a Christy Award finalist, two National Readers' Choice Awards, the Gail Wilson Award of Excellence, and Christian Retailing's Best Award.

Visit these other great hosts on this tour for more great reviews, interviews, guest posts, and giveaways!
Click here to view the The Crushing Depths by Dani Petrey Participants.


I received a complimentary egalley of this book from the publisher. My comments are an independent and honest review. The rest of the copy of this post was provided by Partners in Crime Virtual Book Tours.
(My star ratings: 5-I love it, 4-I like it, 3-It's OK, 2-I don't like it, 1-I hate it.)

Posted by Joan Nienhuis at 6:02 AM

I have this book in my queue and am looking forward to turning the pages.

Thanks so much for taking time to read and review The Crushing Depths. I appreciate it!