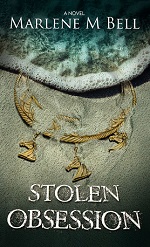 I had trouble liking this novel. As I began reading it, I felt like I had missed an earlier novel as there were so many references to a previous murder. While a few details are revealed as the novel progresses, a prologue or first chapter detailing it would have helped.

I found Bell's writing style difficult to follow. Here is an example of the odd writing style. Annalisse stood in front of a mirror. “Alec stood behind her in the mirror's reflection.” (Loc 2168/5055) So, was he only standing behind her as reflected in the mirror but was not standing behind her in reality? How can a person stand in a mirror's reflection? And another, “The gap between Lucianna and the table was remarkable and unfriendly.” (Loc 2675/5055) The gap was unfriendly? Can a gap exhibit an emotion? Sentences like those stopped the flow of my reading. And sometimes the dialogue exchanges just did not make sense to me, even after reading it a couple of times. An edit would have caught such things.

And there was just too much romantic movement, often at entirely wrong times. An example is shortly after Alec sees someone close to him brutally killed. He holds Annalisse, hugs her and his body “springs to life, rock-hard.” (Loc 2706/5055) Good grief. He should be sad instead of generating sexual responses. I really got tired of the repeated inappropriately timed sexual tension. And when they do have sex, again at a really inappropriate time, there was way too much description for this reader. I really did not appreciate the graphic nature of that scene.

And that reflects my dislike for the characters. Alec seemed like an absolute cad. I didn't like him at all. It seems all he thought about was sex, even after experiencing great tragedy. And I did not find Annalisse engaging. I just could not identify with her personality or her actions. And both of them do really dumb things, often causing suspense by their own unwise actions.

This is the debut effort from this author. It showed potential but could have been so much better with proper editing.

Marlene M Bell is an award-winning writer and acclaimed artist as well as a photographer. She and her husband live in East Texas on a wooded ranch. You can find out more at https://www.marlenembell.com/

I received a complimentary digital copy of this book through Partners in Crime Virtual Book Tours. My comments are an independent and honest review.
(My star ratings: 5-I love it, 4-I like it, 3-It's OK, 2-I don't like it, 1-I hate it.)
Posted by Joan Nienhuis at 4:38 PM