God on the Brain by Bradley L Sickler 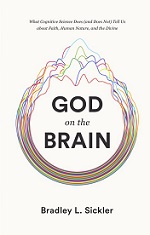 This book turned out to be a little different than what I was expecting. Based on the subtitle, I was expecting a report on the latest findings of cognitive science as they relate to my Christian faith. When I came to this quote, I knew the book would be something different. “At present only a small number of studies exist on the relation between neural activity and religious behavior,” Sickler says. (Loc 996/2505) The studies mostly revolve around meditating, not the accounts we read about in the Bible where people encounter God. There seem to be no definitive results, Sickler says, as there are a variety of ways spiritual practices can affect various processes in the brain. (Loc 1026/2505)

The book really isn't about cognitive science as much as it is about science in general and how it philosophically relates to faith. Sickler explores what scientists says about the existence of the soul, the non-material aspect of humans, and argues for its existence. He explores truth and whether science is the only way to know truth. He explores the nature of materialism, the arguments from evolution, and the nature of knowledge. He also has a good exploration of free will.

Sickler argues that humans are meant to know God and be in a relationship with Him. He explores morality and concludes moral action is meaningless in the naturalistic sphere and only makes sense when we recognize God has wired us for morality.

One argument of his was new to me. Some might argue that the whole concept of God arises in the human brain and therefore God does not exist objectively. Sickler suggests that, just because the concept of God passes through the brain, it does not mean the concept originates in the brain. It is the same as an awareness of seeing a giraffe. That the awareness of the giraffe's existence is in the brain and that the awareness can even be replicated by stimulation does not mean the giraffe does not exist objectively. (Loc 1157/2505)

This is a philosophical look at what science (in general) says about the brain and belief in God. If you are looking for the findings of recent cognitive science studies in relation to faith, you may be disappointed. If you want a philosophical argument that science in no way precludes faith in God, then this is your book.

Bradley L Sickler (PhD, Purdue University) is an associate professor of philosophy and the program director for the master of arts in theological studies program at the University of Northwestern, St. Paul, Minnesota.

I received a complimentary egalley of this book from the publisher. My comments are an independent and honest review.
(My star ratings: 5-I love it, 4-I like it, 3-It's OK, 2-I don't like it, 1-I hate it.)
Posted by Joan Nienhuis at 6:40 AM