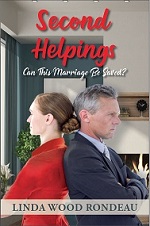 Today is Jocelyn Johnson’s 45th birthday. Unhappy with her marriage of 22 years, the parenting talk show host has planned a noonday tryst with her co-host. A phone call from her college daughter, a peek into her teen-aged son’s journal, a sick preschooler, a Goth daughter’s identity crisis, a middle-school son’s prank, and her husband’s inflamed suspicions, not only interfere with her hopeful birthday plans but throw her family into more chaos than a circus on steroids.

In desperate need of counsel, Jocelyn invites a Christian to dinner, her guest from her morning talk show segment. However, the evening holds little promise of calm. In the midst of bedlam, a forgotten faith rekindles causing Jocelyn to rethink her life and her marriage.

You will laugh and you will cry from the first page to the last as you journey through the day’s events and Jocelyn’s search for Second Helpings.

Maybe it's just me but I did not find this novel humorous at all. This day in the life of Jocelyn is full of bickering, tension, and the antics of a dysfunctional family. Readers who grew up in a household with bickering parents or are in a relationship like that now may have difficulty finding the humor. There are plenty of family issues addressed in this novel, from teen pregnancy outside of marriage to a potential marital affair. Those are such serious and life changing issues, making light of them just did not work for me, even if there were 22 pizzas.


The strong point in the novel is the influence Christian faith can have in healing a dysfunctional family, giving people a second chance. I thought it odd that Jocelyn would invite a woman and her son to a dinner when she knew the whole scene would be chaotic. But Naomi's visit is what made the story more than just a romp through a crazy family with lots of problems.

Readers who enjoy experiencing the bickering between members of a tension filled family will like this novel.

A veteran social worker, Linda Wood Rondeau is also a wife, mother, and grandmother. She is no stranger to family bedlam. Her stories of encouragement and hope come from the heart. She resides in Hagerstown, Maryland with her husband of over forty-years. When not writing, the author enjoys the occasional round of golf. She also enjoys theater and is actively involved with her local church. Find more encouraging words in her blog, Snark and Sensibility, found on her website, www.lindarondeau.com. Visit her on Facebook, Twitter, Instagram and Pinterest.


When I first set out to write Second Helpings, I envisioned writing a story about a harried housewife with a passel of kids. I thought of my mother who went around the house with her hands outstretched toward heaven saying, “Lord, give me strength.” Words she uttered each time we kids did something wrong, which was quite often.

And so I envisioned my own version of, Please Don’t Eat the Daises.

The movie came out in 1960 and starred Doris Day and David Niven, a comedy about a university professor who leaves his job to become a theater critic, creating problems with his family and friends. There’s an iconic scene where the harried housewife rescues her toddler who tries to climb out of the barred NYC windows. One wonders, can this marriage be saved?

As the story developed in my own addled brain, I saw a larger picture than a  madcap comedy. I asked myself, what would happen if a woman who ran a radio show about parenting found herself in a marriage about to fall apart and anticipates an affair? Since the woman, at the outset of the story is not a Christian, what might cause the affair not to happen? What driving force might be greater than her unhappiness? And why was she so unhappy in her marriage in the first place?

The answer came. However unhappy she might be, she was first and foremost a mother. Though married to a psychiatrist, she was the fixer in the family. What problems might her children face to make Jocelyn think twice about an affair? Which of  her children’s crises would be the first signal to abort her affair? The answer came.

When Jocelyn receives a phone call from her college-aged daughter, plans for a tryst suddenly change. Lisette announces she is coming home tonight. Jocelyn’s worst fears for her daughter are confirmed. Not only is Lisette pregnant, she wants to get married next month. History seems to be repeating itself. And Jocelyn does not want her daughter to make the same mistake she thought she made by marrying her baby’s father. Jocelyn sets out on an immediate campaign to convince her daughter she has other options than a hurried marriage. Jocelyn’s tryst will have to wait.

Lisette’s pregnancy revelation has set the stage for twelve hours of bedlam … all on Jocelyn’s 45th birthday. These serious situations create a comedy of misunderstanding against the backdrop of a failing marriage and begs the question, “Can her marriage be saved?”

Book Reviews From an Avid Reader, July 20
Debbie's Dusty Deliberations, July 21
CarpeDiem, July 21
Texas Book-aholic, July 22
Inklings and notions, July 23
deb's Book Review, July 24
For Him and My Family, July 25
Locks, Hooks and Books, July 26
Adventures of a Travelers Wife, July 27 (Author Interview)
As He Leads is Joy, July 27
Artistic Nobody, July 28 (Guest Review from Joni Truex)
Ashley’s Bookshelf, July 29
Because I said so -- and other adventures in Parenting, July 30
Tell Tale Book Reviews, July 31 (Author Interview)
Fiction Full of Faith, July 31
Happily Managing a Household of Boys, August 1
Godly Book Reviews, August 2
I received a complimentary digital copy of this book through Celebrate Lit. My comments are an independent and honest review. The rest of the copy of this post was provided by Celebrate Lit.
(My star ratings: 5-I love it, 4-I like it, 3-It's OK, 2-I don't like it, 1-I hate it.)
Posted by Joan Nienhuis at 6:27 AM

Thanks for being on the tour

I'm not sure what I think about this one! Sounds interesting, but not inspiring.