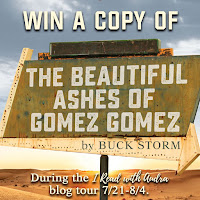 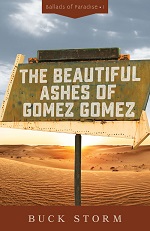 When his wife, Angel, is killed in a head-on collision, Gomez Gomez feels he can't go on – so he doesn't. He spends his days in the bushes next to the crash site drinking Thunderbird wine, and his nights cradling a coffee can full of Angel's ashes. Slow, sure suicide, with no one for company but the snakes, Elvis's ghost, and a strange kid named Bones.

Across town, Father Jake Morales plays it safe, haunted by memories of the woman he left behind, hiding his guilt, loss, and love behind a thick wall of cassock and ritual. Then a shady business deal threatens the town – and his good friend Gomez Gomez – and Father Jake can't just stand by and watch. But what happens when the rescuer is the one in need of saving? 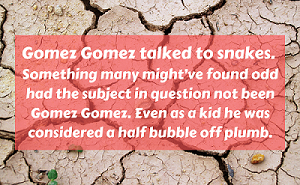 The Beautiful Ashes of Gomez Gomez is quirky, heartfelt, and deeply human. Lives and hopes collide in the town of Paradise, stretching across decades and continents in this epic story of forgiveness, redemption, and love.

It took a long time for this book to grab me. It was not until about the last 40 pages I was really happy I was reading it. While I appreciated the ending and was moved by it, I am not sure it made up for the slow pace of the rest of the book. I just could not find the characters engaging. They almost seemed liked caricatures of real people. Each of the characters was flawed but almost to a debilitating extreme. And the plot seemed absent, void of structure for much of the novel. The story just seemed to ramble along for quite some time.

I was not amazed at Storm's writing style. The novel seems to be something like magical realism with talking snakes and the ghost of Elvis appearing often. Some of the writing was lyrical in almost an other worldly way but the pace was slow. For much of the novel I wondered if something really life changing would ever happen.

And there were a couple of pet peeves in this novel. One is a dream Gomez Gomez had. We don't find out it is a dream for some time. I thought it was a flash back at first. I don't like it when an author does not identify a dream right off. And then there was the confusing way of addressing Paradise Chief of Police Matthias Galt. Sometimes he was identified as Officer Galt in the text, not just in dialogue. I can see people referring to him in various ways in dialogue but not the author doing so in the text.

The last 40 pages or so of the novel made it into a story of forgiveness, restored love and new beginnings. Readers who don't mind a rambling story leading up to that point will appreciate the novel.

Buck Storm is a critically acclaimed author and musician whose stories have found friends around the world. His nonfiction work includes Finding Jesus in Israel, and Through the Holy Land on the Road Less Traveled. His novels include The List, The Light, Truck Stop Jesus, and The Miracle Man. He and his wife live in North Idaho and have two married children. You can learn more at www.buckstorm.com and find him on Facebook (@buckstormauthor), Twitter (@buckstormauthor) and Instagram (@buckstorm).

I received a complimentary digital copy of this book from the publisher. My comments are an independent and honest review. The rest of the copy of this post was provided by the publisher.
(My star ratings: 5-I love it, 4-I like it, 3-It's OK, 2-I don't like it, 1-I hate it.)
Posted by Joan Nienhuis at 6:16 AM