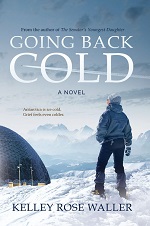 I enjoyed this science fiction novel that is more centered on character than scientific wonder. The content is very character driven with many personal conversations and lots of daily chatter included. The science involved is mostly a framework for the character development.

The novel centers on Dr. Jane Whyse. She is a physicist with a theory for faster than light travel. She, her chemist husband and their three year old son go to Antarctica and join a team to develop and test her theory. The team spends several years of summer months there, returning back to the states during the rest of the year for additional scientific work. The novel only covers the months in Antarctica, jumping from year to year.

Jane Whyse becomes pregnant while at the research station but then has a miscarriage when back in the U.S. The plot follows the continuing struggles Whyse experiences. It develops to the point where it impacts her work and the project is in jeopardy.

There is quite a bit of scientific language used, referring to procedures, crystals and minerals. I was hoping for an author's note at the end clarifying what was actual science from today and what was imagined for the future. No information like that was included in the digital copy I read.

This is a good book for readers who enjoy an exploration of character struggles in the context of near future scientific experiments. There is a good exploration of Christian faith and how one accepts tragedy, such as a miscarriage, from a sovereign God. That issue was handled very well and was, I think, the strength of the book.

Kelley Rose Waller writes fiction to imagine new life experiences. She has a BA in English. Her debut novel, The Senator's Youngest Daughter, was released in 2016. Her day job as vice president of a marketing firm offers her the opportunity to write and plan for clients in diverse fields. She and her husband live in Lancaster, PA, with their children and their dog. You can find out more at http://www.kelleyrosewaller.com/ .

I received a complimentary digital copy of this book from the author. My comments are an independent and honest review.
Posted by Joan Nienhuis at 5:26 PM