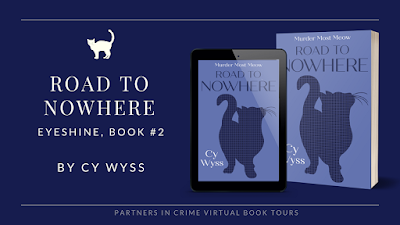 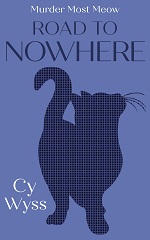 PJ Taylor, the feline shapeshifter, is back! Someone is kidnapping people’s pet cats and holding them for ransom. When PJ’s beloved niece is catnapped, the trail leads PJ to Nowhere, a tiny hamlet north of her hometown of Mayhap. What intrigues will PJ find among the inhabitants of this minuscule community? You can bet it involves at least one person up to no good and flushing this person out could be…murder!

This is a quirky but entertaining mystery. It is the first I've read in this series and I felt it read well on its own. What a unique character construction – a human who turns into a cat at sunset then back to a human at sunrise. The kind of investigation a cat can do, such as getting information from other animals, was a clever twist in a mystery plot. The only aspect of the novel I did not like was the many allusions to kind of weird romantic attractions and sex. There was nothing graphic but the allusions just seemed kind of icky.

This is a good novel for readers who would like a mystery investigation with unusual characters and techniques.

Cy Wyss is a writer based in Indianapolis, Indiana. They have a Ph.D. in computer science and their day job involves wrangling and analyzing genetic data. Cy is the author of three full-length novels as well as a collection of short stories and the owner and chief editor of Nighttime Dog Press, LLC.
Before studying computer science, Cy obtained their undergraduate degree in mathematics and English literature as well as masters-level degrees in philosophy and artificial intelligence. They studied overseas for three years in the UK, although they never managed to develop a British accent.
Cy currently resides in Indianapolis with their spouse, daughter, and two obstreperous but lovable felines. In addition to writing, they enjoy reading, cooking, and walking 5k races to benefit charity.

Visit these other great hosts on this tour for more great reviews, interviews, guest posts, and giveaways!
Click here to view the Road To Nowhere by Cy Wyss Participants.

Your review has me intrigued enough for this to go on my list.

I am so excited to read this book! My email is tmcooper1972@gmail.com