What They Meant for Evil by Rebecca Deng with Ginger Kolbaba 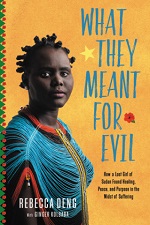 We've heard of the Lost Boys. Rebecca Deng is one of the Lost Girls of South Sudan, a survivor of the Sudanese civil war. Her village, in what is now South Sudan, was totally destroyed in the Bor Massacre of 1991. Thousands were killed and a hundred thousand were displaced during that time. She is one of 89 girls who was able to leave the refugee camp and relocate in the U.S.

Hers is an amazing story. She writes of life in her village as a child then fleeing when she was six. Her mother having just died in childbirth and her father fighting, she fled with relatives. They walked through burned out villages, finally making it to Kenya. She was separated from her relatives along the way, found her uncle, then entered a refugee camp. After eight years in the camp and a teenager, she was able to apply for a program to enter the U.S.

Deng's story is a story of faith. She had lost her immediate family, her village, her childhood. She had seen tragedy and death. She suffered from dehydration and malnutrition. She was frequently mistreated. Yet she can say what others meant for evil, God meant for Good. (Loc 3207/3276)

Deng's memoir is written well. It gives evidence to God's redeeming a life filled with so much loss and bringing it to a place of love and fulfillment.

Rebecca Deng, of South Sudan's Dinka tribe, is one of the 89 Lost Girls who came to the United States in 2000 as a refugee after living eight years in Kakuma Refugee Camp in northern Kenya. The violence she experienced as a child during the Second Sudanese Civil War (1983-2005) has given her a deep empathy for children and young adults who face similar situations today. She became a US citizen in 2006. Today she is an international speaker and advocate for women and children who have been traumatized and victimized by war. She has a bachelor's degree in international development from Calvin College and a master's in ministry and organizational leadership from Grand Rapids Theological Seminary. She has spoken at the United Nations and served as a Refugee Congress delegate at the United Nations High Commissioner for refugees in Washington DC. She is married, has three children and lives with her family in Michigan. You can find out more at www.rebeccadeng.com.

Ginger Kilbaba is an award-winning author, editor, and speaker. She has written or contributed to more than thirty books. She is also a contributing editor for Focus on the Family magazine. She is the former editor of Today's Christian Woman magazine and Marriage Partnership magazine and is the founding editor of Kyria.com. You can find out more at www.gingerkolbaba.com.

I received a complimentary egally of this book from the publisher. My comments are an independent and honest review.
Posted by Joan Nienhuis at 6:26 AM