The Russian by Ben Coes 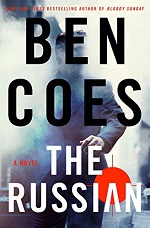 I like international espionage novels pitting a super hero against a nearly indestructible organization out to control the world. This novel is a close fit. Tacoma, something like a CIA agent, is pitted against the Russian mob in America.

While this is something like the ninth novel Coes has written, it is the first of his I've read. I liked it. I liked the superhero Tacoma. He can beat up any thug who comes against him. He can kill every enemy before they even have a chance to point their weapon at him. He can sneak through impenetrable razor wire fences. Well, you get the idea. And he is supported by amazing tech people who can use satellites to warn Tacoma about the armed guy coming up on his left.

In addition to over the top suspense is a bit of information about the Russian mafia. The break-up of the Soviet Union provided a huge opportunity for powerful men to control drug trade. In this novel, the Russian mafia is looking to increase their control in America. Only Tacoma can stop them.

This is a good novel for readers who like a high body count and an indestructible hero. Yes, I noticed some odd and inconsistent aspects to the plot, but all in all, a good novel with which to escape daily chores.

Ben Coes attended Columbia College and was awarded the university's highest writing award, the Bennett Cerf Memorial Prize for Fiction. He was a White House intern under Ronald Reagan and served as a White House-appointed speech writer to the U.S. Secretary of Energy during the Gulf War. He was a Fellow at Harvard University's Kennedy School of Government. He lives in Massachusetts with his wife and children. You can find out more at https://bencoes.com/ .

I received a complimentary egalley of this book from the publisher. My comments are an independent and honest review.
Posted by Joan Nienhuis at 11:03 AM