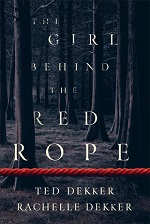 I have always found Dekker's books a challenge to understand and this one is no exception. We readers see into the spirit world along with the novel's characters.

I like our attention drawn to the reality of the spirit realm. I am often unclear, however, as to the meaning and message of the content of the plot. There are plenty of twists in this novel, making the actual representation of the spirit beings more confusing and hard to understand. We do know from 2 Corinthians 11 that the Enemy can disguise as an angel of light so it shouldn't be surprising some spiritual beings are not who they initially seem to be.

There is a heavy emphasis on the role of fear in the Christian's life. Countering fear is the power of God's love. Love is portrayed as a powerful force of light in a world of darkness. I like that.

I enjoyed the story plot. It portrayed well the draw of a powerful revelation and the force of a supernatural command to be separate. The point of view jumped around a bit and I did not like that. Also, some of the negative spiritual forces were identified as our fears. I thought that put too much emphasis on our own being rather than true spiritual warfare.

As with allegorical novels, I am not certain all of the images reflect actual Christian belief. I like that the novel does draw our attention to our fears as well as the power of love and light. I recommend that readers do not form any particular beliefs from a novel like this, however.

Ted Dekker is the award-winning and New York Times bestselling author of more than forty novels, with over 10 million copies sold worldwide. His fiction has received numerous award, including two Christy Awards, two Inspy Awards, an RT Reviewers' Choice Award, and an ECPA Gold Medallian. He and his wife live in Nashville, Tennessee. You can find out more at https://www.teddekker.com/ .

Rachelle Dekker is the award-winning author of the Seer series. She is the oldest daughter of Ted Dekker. She writes full time from her home in Nashville, where she lives with her husband and their son. You can find out more at www.rachelledekker.com.

I received a complimentary egalley of this book from the publisher. My comments are an independent and honest review.
Posted by Joan Nienhuis at 3:17 PM