The Oracle by Jonathan Cahn 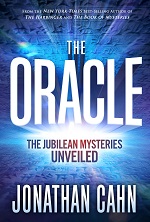 What a clever way to give readers a wealth of information. Cahn has crafted a novel, so to speak, yet in such a way that it conveys facts about Israel's history, both ancient and recent. The Oracle interprets visions the unnamed narrator has. Each vision reveals new information about Scriptures and prophecies regarding the re-establishing of Israel as nation.

The precision with which prophecies were fulfilled is amazing. We readers must rely on Cahn's knowledge of Hebrew to reveal specific people, their names and their representation. We must also rely on his understanding of Hebrew dates and their significance. Cahn has included lots of footnotes so his work can be checked out. The amount of research he must have done to discover the specifics seems overwhelming.

A few corresponding dates, names and events could be described at coincidences. Cahn presents so many of these relationships the evidence demands we recognize God's hand in the re-establishment of Israel as a nation. The U.S. even had a part in the plan by recently recognizing Jerusalem as the capitol of Israel on the exact day, Cahn says, it was to happen.

Cahn's book includes a few relationships some readers might consider a bit forced. One example is joining together President Trump and Cyrus because Trump spoke an apocryphal saying attributed to Cyrus. Cahn does note that some Christian leaders told Trump he was representative of Cyrus well before he made his statement. (205) Another relationship Cahn relates was Cyrus' declaration after 70 years of captivity and that Trump was 70 years old when he made his declaration. (206) That seems a forced relationship to me.

Nonetheless, the number of relationships Cahn shares that I consider truly amazing are overwhelming. And Cahn does not leave us only in the past. He takes us into the future of the world according to prophecy. As the Oracle says, it is a double-edged sword. (257) Unlike his investigation of the past, Cahn provides no dates for future events.

I recommend this book to those interested in prophecies concerning Israel and their fulfillment. I think you'll be amazed. You will certainly have much to think about.

Jonathan Cahn is the author of The Harbinger, a New York Times bestseller. His next three books were also New York Times bestsellers. He is known for studying the deep mysteries of Scripture and producing messages of prophetic import. He leads Hope of the World ministry, an international outreach of teaching, evangelism, and compassion projects for the needy. He also leads the Jerusalem Center/Beth Israel, a worship center made up of Jews and Gentiles, people of all backgrounds, just outside New York City in Wayne, New Jersey. Cahn is a popular speaker and has been highlighted in many national and international media.

I received a complimentary egalley of this book from the publisher. My comments are an independent and honest review.
Posted by Joan Nienhuis at 8:04 PM