The Extinction Agenda by Michael Laurence 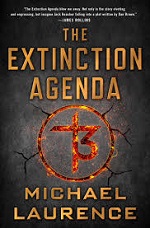 
While searching for the man who killed his partner and his wife, FBI Special Agent James Mason uncovers a shadow organization on the brink of enacting its genocidal agenda and a sinister mass murderer who has been photographed at the epicenter of every historical pandemic since the outbreak of the Spanish Flu in 1918 – without appearing to age.

Mason's quest for answers takes him from the criminal underbelly of America to its untouchable elite, from a dark union at the turn of the last century to a network of Nazi collaborators and a plot for global financial domination. Aided by his longtime friends Gunnar Backstrom – a corporate espionage gun-for-hire – and Ramses Donovan – a sin merchant of questionable morality – Mason uncovers a conspiracy against mankind more than a century in the making. A conspiracy to unleash a deadly virus and make a killing in the process.

I liked this action packed novel. Yes, there might have been a little too much description and thinking by the hero. In general, I thought it a great novel of one man fighting to save the world from destruction by a powerful few.

The characters were over the top. The villain was really, really evil. Mason and his friends were an interesting combination of technical ability, hacking into spy satellites, brute force, innovative thinking and more. I was surprised at some of the information about conspiracy theories, such as the one about 9/11. The whole idea of conspiracy was essential to the plot so it fit well. I would have liked an author afterward, however, to explain some of the information, whether it had factual foundation or was totally fiction.

I like to learn a little when I read a novel and this one contained a great deal about pandemics and the possibility of creating deadly viruses. I also learned a bit about the stock market, such as the volatility index and what drives it.

This is a good book for readers who enjoy a suspense filled novel with lots of innovative technical aspects to it. I'll be looking for the next one from this author.

Michael Laurence was born in Colorado Springs, Colorado, to an engineer and a teacher, who kindled his passions for science and history. He studied biology and creative writing at the University of Colorado and holds multiple advanced certifications in medical imaging. Before becoming a full time author, he worked as an x-ray/CT/MRI technologist and clinical instructor. He lives in suburban Denver with his wife and four children. You can find out more at https://michaellaurencebooks.com/.

I received a complimentary egalley of this book from the publisher. My comments are an independent and honest review. The rest of the copy of this post was provided by the author or the publisher.
Posted by Joan Nienhuis at 8:05 PM