Obedience Over Hustle by Malinda Fuller 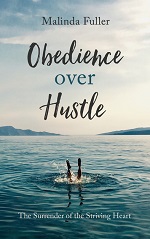 Hustle seems to be a buzzword right now. There is the drive to accomplish much for the Kingdom of God. We are urged to increase our media outreach and be an “influencer.” There are podcasts and webinars on being an over achiever, on setting and meeting all our audacious goals.

Fuller wants us to stop and think about it all. Is that really the life God has called us to? She encourages us to wait on God and determine His purpose for us. A super achiever “waiting” on God? A woman who wants it all, a picture perfect family and a successful career, being silent before God to listen for His small voice of direction?

Bring it on, Fuller. I have seen social media inundated with the fast paced, “do-it-all” kind of Christian hustle. Finally, someone is bringing some sense into the conversation. What a shock to think it is Satan's temptation to do more, to be more, to have it all. (Loc 751/2007)

This is a book young women would do well to read. Fuller points out the pitfalls of the hustle and the blessing of obedience. She tells good stories on herself and others to illustrate her teaching. Bible stories are included too. (Ever wonder what would have happened if Noah had said “no” to God because the whole idea didn't make sense?) She has also included questions on each chapter for personal reflection or group discussion.

Jesus is our example. He never did anything without His Father's approval. Are we willing to follow His example? It means listening for God's direction and then being obedient. Fuller says it has taken her years to get better at asking God what He wants rather than demanding He bless her already established ambitious plans. If you are ready to set aside the hustle and be obedient, this book will get you on the way.

Malinda Fuller grew up in Canada. A summer mission trip to Central America changed her life and six years later she became an intern for that ministry. She and her husband have been married for fourteen years and have served various ministries, churches, and organizations in a variety of ways. You can find out more at https://www.malindafuller.com

I received a complimentary egalley of this book from the publisher. My comments are an independent and honest review.
Posted by Joan Nienhuis at 5:22 PM