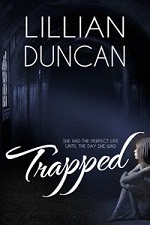 Angelina Matthews has everything—rich, famous and beautiful—until the day she’s kidnapped and trapped in a basement with a madman, wearing only a T-shirt. The dirt is his—the blood is hers. Tormented and tortured, she cries out to God. Help comes in the form of Nate Goodman. When their paths cross months later, Nate discovers Angelina is still trapped—not in a basement but in the memories she can’t escape. Nate knows all about being trapped—and getting un-trapped. As an ex-Chicago cop he’s had his own demons to wrestle, but his faith helped him to move forward. He reaches out to Angelina whose paranoid delusions have her trapped still. But are they delusions?


I enjoyed this psychological thriller. Duncan takes an unusual approach to suspense, concentrating on being mentally trapped after being kidnapped. I was a bit surprised when Angelina was rescued early on in the novel. That was just the beginning of the suspense, however. Angelina faced ongoing terror as whispered threats continued to follow her. While some people tried to convince Angelina they were only in her mind, the terror was all too real.

I liked the strong Christian message in the novel. The need for salvation and the strength only God can provide was presented clearly. I liked the many suspicious characters Duncan developed, even if some of them were a little over drawn. There were plenty of red herrings in that respect. I liked the subtle romance between Angelina and the policeman who initially came to her rescue.

Duncan's writing style is engaging while being straight forward. While there were no passages of literary magnificence, the well developed plot kept me reading from the suspenseful beginning to the suspenseful end.

Lillian is a multi-published author who lives in the middle of Ohio Amish country with her husband and a menagerie of pets. After more than 30 years working as a speech pathologist for children, she believes in the power of words to transform lives, especially God’s Word. Her goal is to write stories that entertain but also demonstrate God’s love for all of us. To learn more about her, visit www.lillian-duncan.com as well as her devotional blog at www.PowerUpWithGod.com.


TRAPPED is my latest suspense novel. And suspenseful, it is! With just the right about of romance to make it even better. You can’t help but love Nate Goodman—small-town policeman, believer in truth, justice, and Jesus—comes back home to the sleepy town of Mt. Pleasant, Ohio to work because nothing ever happens—until it does. Angelina Matthews has everything. She’s rich, famous and beautiful until the day she’s kidnapped and trapped in a basement with a madman. Tormented and tortured, she cries out to God. Help comes in the form of Nate Goodman. When their paths cross months later, Nate discovers Angelina is still trapped, not in a basement but in the memories she can’t escape. As an ex-Chicago policeman, Nate knows all about being trapped—and getting un-trapped so he reaches out to help. Between the two of them, they have more than their fair share of problems. But that’s what makes the story exciting. I have a philosophy when it comes to writing. If I find it boring so will the readers! That means I cut out the boring parts and focus on the action. I loved writing this story with all its twists and turns. 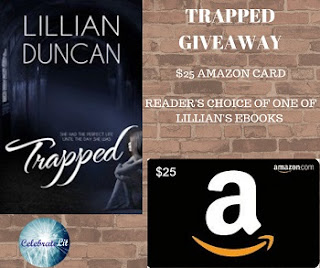 To celebrate her tour, Lillian is giving away the grand prize package of a $25 Amazon gift card and one of her eBook (readers choice)!!
Be sure to comment on the blog stops for nine extra entries into the giveaway! Click the link below to enter.

This novel sounds like one I would enjoy reading. I love a well-written Christian suspense/psychological thriller that keeps you hooked from beginning to end!

Thanks for your review and participation in the blog tour.

This sounds like a very interesting and fascinating read.

This sounds really exciting--with a lot of great thoughts woven in!

Thank you for sharing your book with us and for the giveaway as well. I appreciate them both.

Wonderful review! Thank you for being part of the tour.

Can't wait to read it!