Not From Around Here by Brandon O'Brien 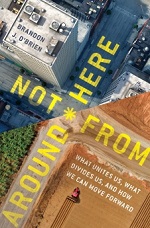 O'Brien wrote this book to help people who claim to find their identity in Christ relate to one another, even if they are radically divided in their political, moral, racial, or other viewpoints.

He does this by telling his own story which is the majority of the book. He gives some facts and figures but concentrates on his own story hoping it will help readers understand rural and urban areas. He grew up in Bentonville, Arkansas (a dry county). He studied and worked in suburban Wheaton, Illinois (where Christians served beer and wine at every gathering). He is now in Manhattan. While I appreciate learning the best way to catch crawfish and the right way to board a Manhattan bus, I would have preferred stories from a variety of people, not just O'Brien.

O'Brien ultimately has good suggestions, even if it does take him a while to get to them. We should learn from each other, having intentional conversations leading toward seeing life from another person's point of view, he says. We need to remember the sinful nature of man and recognize our own bent to perceive people the way we want to. As Christians we are to be quick to repent for our wrong perceptions.

Dwelling in unity is a nice idea, O'Brien says, but is really hard work. (156) It is only through God's grace and our sacrifice, discomfort and humility it will happen. He suggests the spiritual practice of The Daily Examen as a good place to start and then prayer.

This is a good book for readers who like teaching in the context of story, O'Brien's story. I would have liked a variety of stories rather than an emphasis on his own. I did appreciate his admonition to readers in the end. If the Christian church in America wants to bear witness to the kingdom of God, we have to figure out how to have our identity in Christ be the foundation for our lives. All other identities, whether political or geographical or ethnic, must be secondary.

Brandon O'Brien (PhD, Trinity Evangelical Divinity School) is Director of Content Development and Distribution for Redeemer City to City, where he coordinates, edits, and shepherds writing projects with Timothy Keller and urban church planters around the world. Brandon has served in pastoral ministry, worked in publishing, authored a few books, and taught for state and Christian colleges and universities. He and his wife and their two children live in Washington Heights, NY.

I received a complimentary egalley of this book from the publisher. My comments are an independent and honest review.
Posted by Joan Nienhuis at 5:26 PM