A Mosaic of Wings by Kimberly Duffy 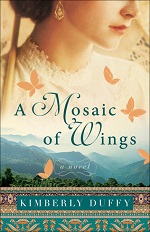 I liked this historical novel set in the late 19th century. Duffy does a good job of helping us understand the difficulties women had at the time in the field of science. Nora is a dynamic character, wanting to follow in her father's footsteps, studying entomology at Cornell and carrying on the scientific journal he had started. She takes the opportunity to go on a research expedition to Kodaikanal, India. Owen, a rival classmate, is along and we wonder if they can overcome obstacles to spark a romance.

One theme prominent in the novel is the plight of women at the time. Nora is restricted to illustrating butterflies at the camp rather than venturing out to discover them with the men. Women in science have come a long way from that time.

Another prominent theme is the responsibility of Christians in a land with another major religion. Nora meets a young girl who had been educated in a Christian mission school and had become a Christian. Her father has dedicated the girl as a sort of temple prostitute upon womanhood and Nora wants to save her from the fate. This issue would make for good discussion revolving around what Christians should and should not be doing in other cultures.

The novel begins and ends in the United States but the middle part in India is fascinating. I liked all the descriptions of the foods, clothing and customs.

I recommend this novel highlighting a woman trying to forge her way in a man's world. You'll also get a good glimpse of academic life in the era, the influence of parents on career choice, and a thoughtful exploration of the responsibilities of Christians in other cultures. No discussion questions for reading groups were included.

You can read an excerpt here and watch the book trailer here.

Kimberly Duffy is a Long Island native currently living in Southwest Ohio, via six months in India. When she is not homeschooling her four kids, she writes historical fiction. She loves trips that require a passport, recipe books, and practicing kissing scenes with her husband of twenty years. You can find out more at www.kimberlyduffy.com. Photo credit: Laura Hicks Photography.

If your business doesn’t have many good reviews on your Google business page, or maybe has too many negative ones, But you should think of buying some good Reviews.

I think the admin of this website is genuinely working hard in support of his web site,
since here every material is quality based stuff.