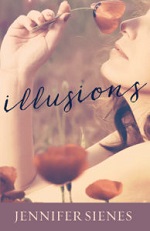 Corey Schaffer, pastor’s wife and mother of two teens, has spent her entire marriage subconsciously repenting for one reckless night the week before her wedding.

Upon discovery of Corey’s indiscretion, her 17-year-old daughter, Taylor, is in a car accident resulting in a weeklong coma, traumatic brain injury and memory loss. Corey is riddled with guilt and would like nothing better than to confess all to her husband, Paul. But how can she when his pastoral position is at risk, thanks to their son’s thoughtless act of rebellion the year before—an act Paul has yet to forgive?

Instead, Corey loses herself in the day-to-day work of Taylor’s rehabilitation and prays God will give her the courage to face the past. But when a disgruntled church member sees an opportunity for revenge, Corey must find the faith and strength to put her family first, even if it means walking away.


Sienes' novel is a graphic portrayal of the stress that can exist in a pastor's family. Add an unconfessed sin to the situation and the stress level is magnified. When evidence of the sin explodes into the open, we get to see how the family members handle yet more pressure.

I had mixed feelings about the characters in the novel. I had compassion for Corey, a pastor's wife who felt she needed to give up her dream of teaching to be the kind of wife her husband thought the church demanded. I did not like Paul, the pastor husband, at all. Perhaps that was by design as he was so caught up in succeeding at church he ignored his family.

Several themes are woven into the plot. Trusting another with the truth is a huge one. Forgiveness is another. Loving the way Christ loves us is yet another. There are also several issues concerning the general dynamics of family life, like really finding out why a child is misbehaving.

There is a great deal of tension between husband and wife and between parents and children in much of this novel. That might be a bit uncomfortable for readers who grew up in a tension filled family. The end is a bit fast as issues are quickly resolved when it seemed for much of the novel the healing and restoration would take longer.

Jennifer Sienes holds a bachelor’s in psychology and a master’s in education, but discovered life-experience is the best teacher. She loves Jesus, romance and writing—and puts it altogether in inspirational contemporary fiction. Her daughter’s TBI and brother’s suicide inspired two of her three novels. Although fiction writing is her real love, she’s had several non-fiction pieces published in anthologies including several in Chicken Soup for the Soul. She has two grown children and one very spoiled Maltese. California born and raised, she recently took a step of faith with her real-life hero and relocated to Tennessee.


Since I was twelve years old, I’ve been writing stories. I even wrote fan-fiction before it was a thing—a Happy Days episode, which I’m sure dates me. I took every creative writing class I could, starting in high school, and even declared journalism as my college major until I realized I like fiction a whole lot more than truth because I can create the characters any way I like.

However, my first attempts at writing emotionally charged novels fell flat; I hadn’t lived enough to truly understand what deep emotion felt like. Then life happened—a series of tragedies that made me feel I was more on par with Job than with Jesus. Someone wise told me that all writers must find the core of why they write—that deep part of us that God instilled in our hearts. What is it we, as writers, want to communicate to our readers? What I came away with was that we all need hope, especially in our darkest days.

Illusions was born out of a near-fatal car accident my daughter was in only weeks after her eighteenth birthday. It was walking through that accident with her that started the what if questions years later. What if an accident is the result of a mother/daughter argument? What if that argument was caused by something the mother did in her past—a deep, dark secret that even she cannot face? And what if that mother is held to a higher standard than most others? Say the wife of a pastor? And what if that pastor already has a black mark against him because of an act their other child (a boy) previously committed?

Would the congregation turn against him? We all know people in church who seek any opportunity to throw a wrench into things—that live with a big ol’ log in their eye, blinding them from the concept of grace.

To add to the tension (because, what’s the point of a story without it?), what if the accident caused a traumatic brain injury and the daughter remembers nothing? It may not be on par with Sophie’s Choice, but now a mother is torn between wanting her daughter to be whole again and hoping the deep, dark secret remains lost somewhere in the recesses of her mind.

Admittedly, the two children of Corey and Paul Schaffer (the main characters) are based loosely on my own children, Nicole and Christopher. It is so much easier to write what I can easily envision in my mind. And many of the challenges Taylor (the accident victim) faces were actually those my own daughter experienced. But that’s where truth and fiction part ways. So, Illusions started with inspiration, but God took it to whole new level. It’s one of the ways He uses the challenges I’ve faced in life to connect with readers and hopefully give them His inspiration and encouragement.

Book Reviews From an Avid Reader, May 13
Godly Book Reviews, May 13
Through the Fire Blogs, May 14
Genesis 5020, May 14
Emily Yager, May 15
Texas Book-aholic, May 16
deb's Book Review, May 17
Debbie's Dusty Deliberations, May 18
Inklings and notions, May 19
reviewingbooksplusmore, May 19
For Him and My Family, May 20
Happily Managing a Household of Boys, May 21
Truth and Grace Homeschool Academy, May 22
Older & Smarter?, May 23
CarpeDiem, May 23
Moments, May 24
Locks, Hooks and Books, May 25
Pause for Tales, May 26 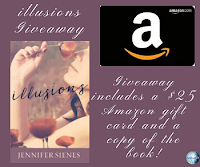 To celebrate her tour, Jennifer is giving away the grand prize package of a $25 Amazon & a copy of the book!!
Be sure to comment on the blog stops for nine extra entries into the giveaway! Click the link below to enter.

The cover is pretty, sounds like a good book.

I'm reading this right now, and finding it very thought-provoking.

Thank you so much for your review!

So is possible that HIV Disease can be cured because I have been scammed so many times not until I came across this great man herbalist Dr Akhigbe who helped me at first I never believe all this comment and post about him and I was very sick because I have been infected with HIV/AIDS for the past two year,just last 2 months I keep reading the testimony about this man named Dr Akhigbe they said that the man is so powerful he have cured different type of diseases, I keep monitoring his post of some people about this man and I found out that he was real so I decided to give him a trial I contacted him for help and he said he was going to help me get my cure that all I needed to do was to send him money to prepare the medication after which it will be sent to me via DHL courier delivery services which I did to my greatest surprise the medication was sent to me he gave me instructions to follow on how to drink it that after  three weeks I should go for check up,after taking the medicine and follow his instruction after three weeks I went back to the hospital for another test, at first I was shocked when the doctor told me that I was  negative I ask the doctor to check again and the result was still the same negative that was how I free from  HIV VIRUS at of the shock I decided to come and share my own testimony with you for those who think there is no cure for HIV VIRUS the cure as finally come'  out stop doubting and contact Dr Akhigbe via email drrealakhigbe@gmail.com he will help you out you can also whats App him via +2348142454860 he is also perfect in curing DIABETICS,HERPES,HIV/AIDS, ;ALS,  CANCER , MALARIA , BACTERIA DIARRHEA, MENINGITIS,HEPATITIS A AND B,ASTHMA, HEART DISEASE, CHRONIC DISEASE. NAUSEA VOMITING OR DIARRHEA, KIDNEY DISEASE,, SCHIZOPHRENIA, LUPUS,EXTERNAL INFECTION, COMMON COLD, JOINT PAIN, OSTEOPOROSIS, RABIES RHEUMATISM, THYROID, GALLSTONE, COLD & FLU, DENGUE, HUNTINGTON'S DISEASE, CIRRHOSIS, DENGUE FEVER, EPILEPSY,STROKE,TUBERCULOSIS ,STOMACH DISEASE. ECZEMA, PROGERIA, EATING DISORDER, LOWER RESPIRATORY INFECTION. etc believe me that deadly disease is not longer a deadly sentence because dr akhigbe has the cure.the godfather of herbal root.email: drrealakhigbe@gmail.com         whatsapp number.  +2349010754824 website: https://drrealakhigbe.weebly.com

Beautiful work ! You should consider giving it a good launch, try https://honestbookreview.com for reviews and visibility in a crowded marketplace. Down the line, try bookbub for marketing.

Great review! Thank you for sharing.

I appreciate hearing about your book, thanks and for the giveaway also. Thanks so much!