The Secret Powers of the Author Mastermind by J Thorn 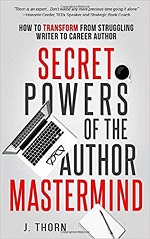 While I had always considered writing a solitary endeavor, I'm now convinced of the value of a mastermind group. Thorn gives a convincing argument for the benefits of being in a small group of like minded people sharing a goal or passion.

Thorn gives the science behind group learning and identifies a number of such groups, like the Inklings. He shares his own experiences and tells us how such groups differ from critique groups.

Thorn mentions scene analysis as a major aspect of his mastermind (virtual) meetings. A benefit here is that an author can receive advice early on, after writing a scene or two. Errors can be found early rather than after the entire novel has been written and the errors compounded in scene after scene.

The other benefits Thorn reveals are many. I was surprised with the concept of collaborating, never having thought of doing something like that. I was also intrigued with Thorn talking about the positive mental attitude arising from mastermind groups. Carpenters can still work with a bad mental attitude but not so for writers. Mental attitude is so important to creativity and being in a group helps.

The hardest part might well be finding a mastermind group or forming one. Thorn notes he interviews people who desire to participate, looking for commitment. It may take months to find the right twelve people. And there will be a fee involved. As Thorn says, if you question the fee in joining a group then you probably shouldn't.

This is a valuable book for writers, informing them of the benefits of being in a mastermind group. There is a plug at the end to join Thorn's but that does not detract from the information the book contains.

J thorn earned a B.A. in American History from the University of Pittsburgh and a M.A. From Duquesne University. He is a full-time writer, part-time professor at John Carroll University, co-owner of Molten Universe Media, podcaster, FM radio DJ, musician, and a certified Story Grid nerd. He is a popular author of horror, science fiction, action & adventure, and fantasy. He has sold more than 185,000 books worldwide. He is a member of the Science Fiction and Fantasy Writers of America, the Horror Writers Association, and the Great Lakes Association of Horror Writers. You can find out more at http://jthorn.net/welcome/ .