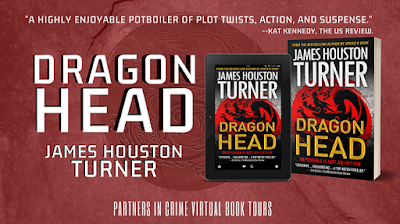 
“TURNER BARELY PAUSES FOR BREATH IN THIS EXCITING THRILL RIDE.” 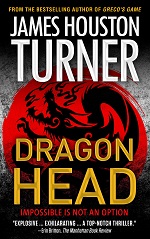 --Publisher’s Weekly
One-and-a-half billion dollars vanishes out of a numbered account into a cyberspace maze. But the thief who stole it lies dead on the tracks of Hong Kong’s Mass Transit Railway, his access codes having perished with him.

If it were simply a matter of missing money, the United States would not be concerned. But a Hong Kong crime boss named Dragon Head wants the money to fund an army of hackers, one of whom has already penetrated America’s GPS network. The result: a midair collision that kills more than a thousand people.

With national security at stake, the Director of National Intelligence becomes very interested in the whereabouts of that money. He wants the funds to remain lost. But Dragon Head wants them found. And Colonel Aleksandr Talanov is caught in the middle.

Both sides believe Talanov knows where the money is. But Talanov doesn’t have a clue. So both sides threaten to kill his closest friends unless he locates and surrenders the money. It’s an impossible situation when impossible is not an option, because whatever choice Talanov makes, someone will die.

“Snappy dialogue … humor and heart … scenes crackling with life as Talanov races against the clock in this complex spy thriller that delivers charm and thrills.”


“Dragon Head is an explosive story packed with plenty of action and excitement. Like all good spy stories, it’s unclear exactly what everyone is up to and who can actually be trusted. Facing threats on all sides, Talanov is a great hero to follow, tough and quick to dive into the action, but also smart and more than capable of outmaneuvering his enemies. Dragon Head is an exhilarating story that tackles contemporary issues … a top-notch thriller.”

What a ride. It starts out innocently with Talanov, an ex-Russian KGB operative now potential CIA agent, visiting an old friend. Suddenly, there are assassins and bodies and Talanov is on the move. It is not until well into the book we find out, along with Talanov, that a powerful Hong Kong crime boss wants money Talanov had been given during his KGB days. While Talanov had forgotten about the extra money he had been given for operations, it has grown to over a billion dollars. The situation becomes more deadly when we find out there is a powerful person in America who wants the money too.

I found it interesting that the plot included a couple of tech savvy teens. So this action filled international adventure is sort of a combination of highlighting young characters while providing a fast paced plot. The teens had been taken under the care of Talanov's old friend so there are some themes of relationships in the midst of the action. Some of what the teens accomplish seems a little beyond belief but makes for a fun aspect of the novel.

This is the first book I've read in the Talanov series but enjoyed it. There is enough backstory woven through the plot that it can certainly be read on its own. While the novel is definitely in the adult thriller genre, the writing style and involvement of the teens made it seem like a YA novel, so young readers would enjoy it too.

Winner of numerous awards, including "Best Thriller," bestselling author James Houston Turner is known for his Aleksandr Talanov series of spy novels. Talanov the fictional character was inspired by the actual KGB agent who once leaked word out of Moscow that James was on a KGB watchlist for his smuggling activities behind the old Iron Curtain. "His act of heroism – he could have been executed for what he did – gave me the idea of a good-guy KGB agent who became a spy for America," Turner explains.
A native of Kansas, James Houston Turner has been writing since he was ten. After earning his bachelor's degree from Baker University, he moved to Texas, where he earned his master's degree from the University of Houston (Clear Lake). He then headed west to California, where his love of writing turned into a profession with publication of The Spud Book: 101 Ways to Cook Potatoes. Publisher's Weekly called it "A cookbook with ap-peel." Between TV cooking tours, he worked as a journalist at the famed Los Angeles Union Rescue Mission, where he revised their magazine, Lifeline, from a needs-based ministry appeal to a collection of interviews from the streets about changed lives. Those interviews included numerous victims of human trafficking. The magazine won several awards.
During this time, James also worked as a smuggler into Soviet-occupied Eastern Europe, where he transported tons of food, clothing, Bibles, and medical supplies, to needy hospitals and churches. While there, he interviewed many heroes of death camps, gulags, Siberian exile, persecution, illness, hardship, and torture, including assassination squads.
James is also a cancer survivor after doctors in Australia removed a tumor the size of an orange from his face. "I was told if I lived eighteen months I would probably live to be one hundred. That was in 1991, so I am happy to report I am well on my way toward that goal. These experiences continue to influence my storytelling, whether in novels, or, now, in film. My stories are 'overcomer stories,' because that's what I've had to do, and is why I want my stories to leave people with the same hope and faith that strengthened me."
As a self-published author who made the deliberate choice away from traditional avenues, he has accomplished what he calls "the writer's dream" with a film option on one of his novels, Greco's Game. He is also one of a small handful of writers who can function both as a novelist and a screenwriter, with two of his screenplays having also been optioned, with production on his projects scheduled to begin in 2020.
After nearly twenty years in Australia, James and his wife, Wendy, now live in Austin, Texas.

Visit these other great hosts on this tour for more great reviews, interviews, guest posts, and giveaways!
Click here to view the Dragon Head by James Houston Turner Participants

I have been seeing great things about this book so I better put it on my list!

Joan, I really appreciate your review of Dragon Head. One of my goals was to weave some elements of faith into the storyline. Faith is important to me, as it has seen me through some extremely tough times, although my life pales in comparison to Talanov's! Thank you again for taking the time to read Dragon Head. Best always!