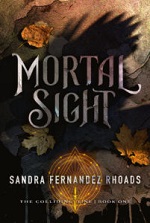 Seventeen-year-old Cera Marlowe wants a normal life; one where she and her mom can stop skipping town every time a disturbing vision strikes. But when a girl she knows is murdered by a monster she can’t explain, Cera’s world turns upside down.

Suddenly thrown into an ancient supernatural battle, Cera discovers she’s not alone in her gifting and vows to use her visions to save lives. But why does John Milton’s poem Paradise Lost keep interrupting her thoughts?

In a race against time and a war against unearthly creatures, will decoding messages embedded in the works of classic literature be enough to stop the bloodshed and protect those she loves?


The debut novel captured me in the first few pages. I was intrigued by the idea of nearly seventeen year old Cera living in this world but thrust into the awareness of an unseen realm. I really liked Cera at the beginning. She is a strong girl, caring for the well being and safety of her young neighbor. I found myself liking her less as she began to lie and act on her desires without thinking, endangering others. I hope to see some character growth on her part in a sequel.

I like how the plot was woven around quotes from Milton's Paradise Lost. Teens who like literature will like that added feature. I like all the suspense in the story although I felt the momentum did slow down a bit in the middle.

There are several issues explored in this novel. Lying to get your way is one. Another is wanting the gifting of someone else. There is also the concept of the value of one life weighed against the good of the entire community. These issues would make for good discussion among teens.

I recommend this novel to readers who enjoy young adult adventures having the intensity of the Hunger Games. You'll find a strong and stubborn female heroine willing to face the evil forces manifesting from another realm. You'll also find that this novel, while a fine read all on its own, is just the beginning of Cera's interaction with the forces of evil. I look forward to reading the next in the series.

Sandra Fernandez Rhoads is a Cuban-Colombian born in Queens, New York but currently lives in Dallas, Texas. Her previous experience includes earning a M.A. in her 17th century crush, John Milton, writing scripts and performance pieces, directing theater, acting, and running an employment consulting and marketing company. As an AFA-NIET National Finalist in Public Speaking, she welcomes an audience and dreams of playing the theme to Jurassic Park on her cello, named Lysander. Mortal Sight is her debut novel.


I am so excited to share this story. The original story seed for Mortal Sight came from the premise: what if someone never felt like they belonged in this world because they really didn’t? They were born for a place they didn’t know existed, an unseen realm. And if so, what things in our everyday world would shout out this truth, point to this other world, and try to get their attention to let them know that the restlessness is intentional and they were called to something bigger than themselves. The use of art and literature throughout the story comes from my own love for art and the artist community. The unique way artists look at the world could point to this other realm. I chose Milton’s Paradise Lost, in particular because the poem speaks of things invisible and unseen wars. I have a deep love for artists and the creative community and love encouraging others to tell stories through art, whether it’s visual, music, poetry, dance, writing, etc. It’s in art’s narrative that we see broken pieces of ourselves. This story came from the idea that art could create common ground, kickstart community, and maybe even change the way we see ourselves, others or even the world.

deb's Book Review, April 30
Rebecca Tews, April 30
Debbie's Dusty Deliberations, May 1
A Reader’s Brain, May 2
Blogging With Carol, May 2
Book Reviews From an Avid Reader, May 3
For the Love of Literature, May 4
Wishful Endings, May 4
Texas Book-aholic, May 5
Inklings and notions, May 6
April Hayman, Author, May 6
For Him and My Family, May 7
Pause for Tales, May 8
Mia Reads, May 8
Through the Fire Blogs, May 9
Truth and Grace Homeschool Academy, May 10
Genesis 5020, May 11
Artistic Nobody, May 12
Emily Yager, May 13

Thanks for being on the tour . I enjoyed reading your review.

This sounds quite interesting. Actually, as Christians, we really don't belong to this world!

Having a proven book helps land a good publisher for your book. Getting review from https://honestbookreview.com and setting up a promotion on Bookbub surely helps. I can do a free book trailer for you !

Sounds like a great read, thanks for sharing and for the giveaway.