Unveiling the Past by Kim Vogel Sawyer 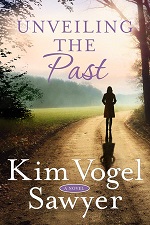 As in the first book, Meghan is a cold case detective. Her captain assigns her to a case that separates her from her detective partner and husband, Sean. She works on discovering what happened to a man who went missing years ago while Sean concentrates on the unsolved death of two boys.

The investigative procedure makes up a good part of the plot but personal issues are really the main focus. Meghan was raised by a single mom with no father around. The case she is working on involves a loving father who went missing and his daughter who wants to be an integral part of the investigation. A missing father in both their lives makes for good conversations about having a heavenly Father. Sean has the opportunity to witness to his crusty and hurting detective partner.

This is a good novel for readers who like to read about relationships being healed and people being transformed by the gospel. There is a very strong element of Christian faith included as well as the healing nature of forgiveness. Sawyer does a good amount of head hopping, jumping around people and places and even going back in time for a few scenes. I don't particularly like that style of crafting the plot of a novel but it does offer a broad exploration of personalities. There is a good discussion guide included so this novel would be a good choice for reading groups.

Kim Vogel Sawyer is a highly acclaimed, best-selling author with more than one million books in print, in seven different languages. Her titles have earned numerous accolades including the ACFW Carol Award, the Inspirational Readers' Choice Award, and the Gayle Wilson Award of Excellence. Kim lives in central Kansas with her retired military husband, Don, where she continues to write gentle stories of hope. She enjoys spending time with her three daughters and grandchildren. Learn more at kimvogelsawyer.com.

I received a complimentary egalley of this book from the publisher. My comments are an independent and honest review.
(My star ratings: 5-I love it, 4-I like it, 3-It's OK, 2-I don't like it, 1-I hate it.)
Posted by Joan Nienhuis at 2:35 PM