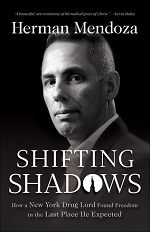 This is a good story of a New York boy who got caught up in gangs and then, as a young man, became part of a lucrative drug running operation with his brothers. Herman married and had a family but also maintained mistresses in apartments. He was imprisoned and had his sentence shortened by going through a rigorous program. He got a regular job for a while but was caught up again in the drug running business. Arrested again, he skipped out on his bail. Caught at his home, he was imprisoned again. His behavior had been so poor, his own lawyer quit working for him.

Herman was put in prison near his brother, Emilio. Amazingly, Emilio had been saved through a prison church. Emilio convinced Herman to attend the services and Herman got saved too, all within the prison walls. The Bible came alive to him. He witnessed to his wife. Her changed life was the beginning of Herman's ministry to others. He was eventually released from prison and reunited with his family. God has been using Herman to share the gospel with others and see many lives changed.

Mendoza's story of a life redeemed for ministry is a good one. It is well written and clearly shows how God can transform a life for His glory.

You can read an excerpt here. You can watch the book trailer here.

Herman Mendoza (www.hermanmendoza.com) speaks nationally and internationally more than 100 times a year on college campuses, in churches, at Christian conferences, and in prisons--with his ministry spanning four continents. He is an associate pastor at Promise Ministries International and is the director of Powerhouse Kids Ministry in New York City. Mendoza lives on Long Island in New York with his wife, Alexandra. Their three children, Samantha, Adam, and Penelope, share in their ministry. Photo credit: Samantha Rivera.